In the last week, President Musharraf from Pakistan has: 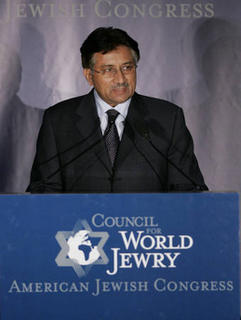 Pakistani President Pevez Musharraf speaks to a gathering of the Council For World Jewry in New York City September 17, 2005. (Reuters)

Pakistani President Musharraf spoke openly about moving forward with relations with Israel at a dinner at the American Jewish Congress in New York City on Sunday:

The Pakistani leader described the groundbreaking dinner meeting, attended by a large cast of Jewish leaders and dignitaries assembled by the American Jewish Congress, as “a historic occasion”.

Musharraf said he has asked President Bush to help with talks between the two countries:

There are some confidentialities regarding the viewpoint of both the parties, President Musharraf said, adding “the discussion is going on and there is no blockage”. He said that Indian foreign minister and president would visit Pakistan to take the dialogue process forward. President Musharraf said he had discussed the Pakistan-India peace process with US President GW Bush and asked him to help the two countries settle their disputes.

Musharraf also denied the rape remark that was printed in a Washington Post interview, although tape recordings make clear it did come from him about Pakistani women crying rape to get a free pass to Canada. This was a big minus on his week of good news.

Musharraf received a standing ovation at his historic appearance at the American Jewish Congress:

Musharraf, pressing his campaign for moderation in the Muslim world, became the first leader of a Muslim nation with no diplomatic relations with Israel to hold a public dialogue with Jewish leaders, officials of the Council for World Jewry said.

The Pakistan military general was given a standing ovation and big round of applause as he arrived late Saturday at the meeting of what is probably the most distinguished and influential community in the United States.

“I cannot imagine that a Muslim and that too a Pakistani and more than that a man in uniform would ever get such a warm reception and such an applause from the Jewish community,” Musharraf said, as he gave a military salute to the audience, which included Pakistani Americans.

“I am convinced that peace in Palestine that does justice to both the Israelis and the Palestinians will bring to a close the sad chapter in the history of the Middle East (and) will revive the historical ties between Islam and Judaism,” he said.

As the peace process progressed towards the establishment of an independent Palestinian state, Musharraf said, Pakistan “will take further steps towards normalization and cooperation, looking to full diplomatic relations” with Israel.