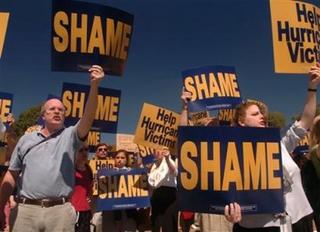 This caption reads,”Moveon.org members and Hurricane Katrina evacuees demand accountability from the Bush administration for the disaster in New Orleans and the Gulf Coast during a protest near the White House Thursday, Sept. 8, 2005 in Washington.” (AP) What the caption does not tell you is that there were a total of “3” Katrina evacuees who were “demanding accountability” from President Bush!

New Orleans residents Iona Renfroe, Michelle Augillard and Christine Mayfield recounted their stories of surviving the storm and the described the lack of assistance they received in the aftermath. Each criticized the federal government without addressing accusations of early failures by local and state officials.

Renfroe, a New Orleans attorney, claimed that there has been “absolutely no response by the federal government … absolutely nothing has been done.”

But… According to the Department of Homeland Security, as of Tuesday:

* The federal rescue effort involved more than 71,000 personnel
* More than 45,000 rescues.
* 23,000 rescues by the U.S. Coast Guard.
* Approximately 273,000 citizens had been evacuated.
* Two-thirds of the evacuees are still being housed in 550 federally-organized shelters around the country.
* Federal authorities had gathered and distributed 11.3 million military “Meals Ready to Eat”.
* 18 million liters of drinking water.

MoveOn.org is backtracking today about its planned racial advertising to attack Judge Roberts:

A liberal group indicated Thursday that one of its officials was wrong when he said it would broadcast a TV ad with images of poverty-stricken hurricane victims to raise questions about the civil rights record of John Roberts, the nominee for U.S. chief justice.

The statement by MoveOn.org Political Action came a day after Ben Brandzel, the group’s advocacy director, told USA TODAY that such an ad would air next week, during Roberts’ confirmation hearings in the Senate. Brandzel described plans for a provocative ad that would include images of African-American evacuees and question whether the conservative judge is sensitive to issues that are important to minorities and the poor.

On Thursday, however, MoveOn Executive Director Eli Pariser said the group has “no plans, and … never had plans, to produce such an ad.” Pariser did not blame USA TODAY, and he said that “we regret any misunderstanding that may have arisen because of anything that our staff member might have told USA TODAY’s reporter.”

On Thursday the Family Research Council put out a press release yesterday, stating, “As a Louisiana native, I (FRC President Tony Perkins) am outraged that MoveOn.org would exploit the suffering of the people of my state and the Gulf region in their ongoing campaign to destroy Judge Roberts.”

These dirty tactics by MoveOn.org may be backfiring already. Roger Jenkins at The Chatanoogan writes today:

If Moveon.org didn’t play out Cindy Sheehan’s crusade enough as well as fund it, now Moveon is funding many of the New Orleans evacuees while they sit outside the White House and demand accountability from George Bush.

Knowinging that the funding is not granted by George Bush but by Congress, does anyone realize that New Orleans was granted funding for the levees and yet they chose to spend the money elsewhere? Does anyone understand that there was clear evacuation plans with buses in place to bus them out of the city for those that didn’t have transportation out of town?

Yes, this was a real tragedy and, being one who really enjoyed my visits to New Orleans as well as many others, it’s so easy to blame others than for others to blame themselves.