THE PEOPLE OF BESLAN REMEMBER THE MASSACRE IN THE SCHOOL,
VIDEO HERE

The bloodbath in the gymnasium where the tortured children and mothers were being held was one year ago today. 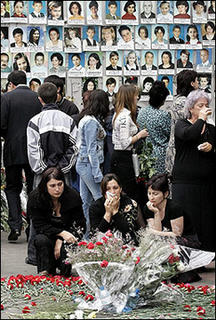 A group of women mourn for those killed during a ceremony marking the first anniversary of the Beslan Massacre today in North Ossetia. The pictures of the 331 children and adults who perished in the terrorist assault hang on the walls of the bombed school gymnasium. (AFP)

The residents of Beslan still angry and blaming and hurting, marked the first anniversary of the terrorist assault on their children and on their community. Meanwhile, President Putin met the mothers on Friday and today ordered a review of the offficial failings and chaos of the massacre:

President Vladimir Putin, who met Beslan parents on Friday to hear their accounts, on Saturday ordered prosecutors from Moscow to check official failings and chaos at the end of the siege by pro-Chechen militants that ended in a bloodbath.

Tearful residents held a minute’s silence after filing through the town’s shattered school on Saturday, adding wreaths to a vast floral memorial to the 331 people who died, mostly in an explosion, fire and shooting on the final day of the siege. 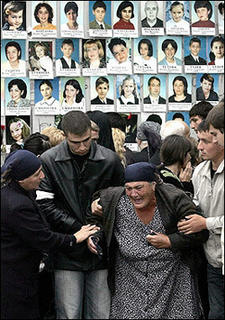 A woman mourns her loss in front of the destroyed school of Beslan during a ceremony marking the first anniversary of the hostage bloodbath. (AFP)

The Mothers of Beslan Committee had long demanded a meeting with President Putin. Many have taken their anger out on President Putin but sent four representatives to meet with him:

“They (the prosecutors) will have to conduct exhaustive, additional verification of the entire aggregate of information about this case,” the ITAR-Tass news agency quoted Putin as saying.

Putin was roundly condemned in Beslan for flying into the town the day after the hostage crisis came to an end and holding a televised meeting with officials, but avoiding encounters with the victims’ relatives.

The Beslan Mothers’ Committee had long demanded to meet with Putin to air its protest over the government’s handling of the tragedy: both the botched rescue operation and the subsequent investigation.

When the invitation for a meeting with Putin finally came late last week, many relatives were angry the president had chosen the first anniversary of the siege for what they suspected was more a political gesture than an attempt to hear their grievances. The committee, however, sent four representatives. 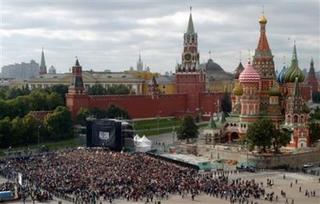 In Moscow, Russians gathered for a moment of silence to remember those who died in the Beslan terrorist massacre, the largest single loss by terrorism in Russian history. Shown, from right, are some of the Red Square landmarks: St.Basil’s Cathedral, the Kremlin’s Spasskaya (Saviour), Tsarskaya (Csar’s) and Nabatnaya (Tocsin) towers. (AP) 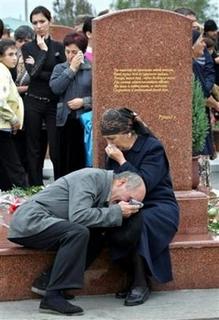