AND, HE BREAKS DOWN BECAUSE OF DREAMT UP, INFLATED, HORROR STORIES FROM THE SUPERDOME.
VIDEO HERE (Harpo)

So, will Oprah make a correction to her audience now that these inflated stories of rape and murder were found to be Katrina folklore? 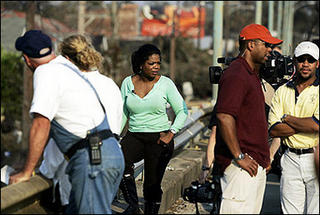 Television personality Oprah Winfrey(C) is seen with her crew on September 4, after filming part of her show in the Ninth Ward neighborhood of New Orleans, Louisiana. (AFP)

On September 5, 2005 a week after Hurricane Katrina struck the Gulf Coast, Mayor Ray Nagin of New Orleans was a guest on “Oprah”:

Oprah: All week long Mayor Ray Nagin who refused to evacuate. We found Mayor Ray Nagin at his command post at the Hyatt. (Mayor Nagin had taken his family to Dallas the weekend before Oprah’s show.)

Oprah: Do you think they (Feds) didn’t respond because they were poor people?

Nagin: I think it got into politics…

Oprah: Were there food drops?

Nagin: There were but not enough. That’s why the people in my opinion got into this animalistic state. Because they didn’t have the resources. They were trapped. You’re getting ready to see something that I don’t know if you are ready to see. They had people standing out there, had been in that frickin SuperDome for five days watching dead bodies, watching hooligans killing people, raping people. That’s the tragedy. They were trying to give us babies that were dying! (breaks down)

Oprah: The Mayor apparently became overwhelmed and disgusted with what has been going on the past six days here and just walked away! He’s become overwhelmed at what’s happened and didn’t have to happen to the children. It’s pretty overwhelming.

Today the LA Times reported that the rumors of rape and murder in the SuperDome were unsubstantiated and false.

The New Orleans Times-Picayune on Monday described inflated body counts, unverified “rapes,” and unconfirmed sniper attacks as among examples of “scores of myths about the dome and Convention Center treated as fact by evacuees, the media and even some of New Orleans’ top officials.”

Wizbang has another Media Whopper today!

The Anchoress notes that maybe the press will apologize to the president now that the hurricane hysteria was found to be based on rumor, right!