I can’t decide which is my favorite segment from this video clip,…
the man who’s been “pissed off for 35 years” (please, get help!) or the screaming men in skimpy kilts running down the street!

Oh, by the way, this wasn’t the largest protest against the War in Iraq since the war started, like it was billed. The ANSWER website itself notes other past protests including a multinational one held a year after the war started that had more protesters. And, still only one aerial shot available from the protest which tells you the rally was not as large as the media had hoped. 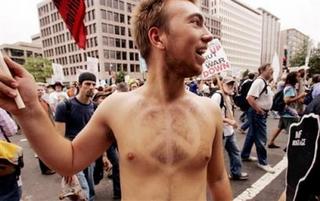 Nathan Bell shaved a peace sign on his chest to show support during an anti-war protest march, Saturday, Sept. 24, 2005, in Washington. (AP) 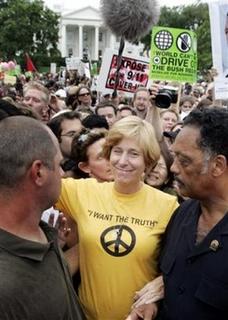 Dang, I wished I would have taped this from CSPAN! I could have bootlegged it and made a killing. It’s the best comedy Hollywood has put out in ages. Although I understand they have a new drama about another leftist in the White House that looks pretty funny. Let’s hope it does better than the last leftist radio outfit they were pushing. 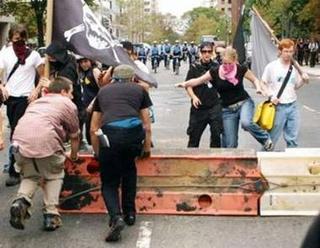 Masked bandit-anachists move in the trash they have collected over the last week to block the street. But, they must be quick with their garbage before the police chase them and arrest them. (Yes,… it’s childish but it’s fun!) (Reuters)

I just took this set of suggested leftist protest rules from Mahablog. Gee, I’m almost sorry I missed out on this:

This is not to say the day was perfect. I have some suggestions for future events:

1. No male under the age of 35 should be allowed to have a bullborn. Dears, you are not nearly as clever as you think you are, and some of us would like our voices heard, too.

2. There should be a syllable limit on the chants. I’ve long believed a good crowd chant should have no more than three syllables. (Examples: “Kick their ass!” “Bring them home!”) You can get a little more complicated within reason, but I suggest an eight-sylable limit. Anything more complicated than that turns into mush.

3. Please, march organizers, see to it that large numbers of people are not forced to stand in heat or cold for an hour or more waiting for a march to start.

California Conservative has pictures from the “peace and vandalism protest” in San Francisco on Sunday.

And, HERE is some on the Denver Anti-War(?) Rally from Free Republic.

“Mr. Right” from The Right Place blog wrote a satirical piece on the protesters from this weekend that is good.