BBC SAYS ISRAELI SOLDIERS “WOULD HAVE SHOT AND PROBABLY KILLED” PALESTINIANS FOR “JUST STANDING” NEXT TO THE EGYPTIAN BORDER WALL BEFORE ISRAEL EVACUATED GAZA,
VIDEO HERE 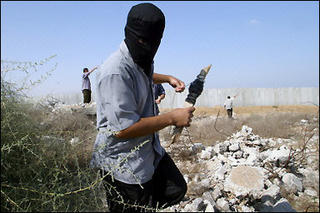 A Hamas militant prepares to detonate explosives attached to the security barrier separating the Gaza Strip from Egypt. Hamas militants blew a gaping hole in a concrete barrier on the Gaza Strip’s southern border, enabling Palestinians to continue surging into Egypt despite pledges to restore order. (AFP)

Hamas militants blew a whole in the barrier separating Gaza from Egypt today:

Hamas militants blew a gaping hole in a concrete barrier on the Gaza Strip’s southern border, enabling Palestinians to continue surging into Egypt despite pledges to restore order.

Under pressure from Israel, Egyptian authorities set a new deadline for all Palestinians to return to the Gaza side after revealing they had uncovered a tunnel stashed with weapons on the border.

Hundreds of people continued to scramble across the divided border town of Rafah after witnesses said Hamas members detonated mines next to concrete slabs dividing Palestinian Rafah from Egypt, blowing a hole which people could clamber through.

A single Egyptian soldier looked on helplessly. Amid the mayhem, Hamas militants posed for pictures with a 10-year-old Egyptian girl. 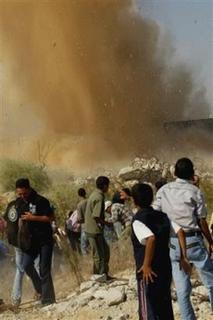 Kaboom! Palestinians run after an explosion as in a section of the border wall was blown up by civilians trying to cross between the Rafah Refugee Camp, in the southern Gaza Strip and Egypt, Wednesday Sept. 14, 2005. (AP)

The tunnel contained 38 firearms and three rocket-propelled grenades, the official added, speaking on condition of anonymity because he was not authorized to speak to the press.

The tunnel penetrated to the Palestinian side of the frontier, and Palestinian security forces seized the weapons Wednesday, the official said.

The good news is that Palestinian Leader, Mahmoud Abbas, said that he will restore order by 18:00 today.

Scratch that… The deadline came and went and scores of Palestinians are continuing to cross into Egypt.

Jim Hoft
Jim Hoft is the founder and editor of The Gateway Pundit, one of the top conservative news outlets in America. Jim was awarded the Reed Irvine Accuracy in Media Award in 2013 and is the proud recipient of the Breitbart Award for Excellence in Online Journalism from the Americans for Prosperity Foundation in May 2016.
BREAKING HUGE: Judge McCullough Rules 2020 PA Election Likely Unconstitutional - Gives State Legislators Power to Choose Electors!
BALD-FACED LIES: Dominion Says Assertions of Vote Switching Are "Completely False" -- But We Have Two Videos of Dominion Executive Eric Coomer Showing How to Switch Votes
BLAST FROM THE PAST: Smartmatic CEO Introduces Creepy Bill Gates at Global Citizen Conference in June 2015
BLACK FRIDAY PANIC: CNN Airs Possible Path for Trump 2020 Win
DEVELOPING: Attorney Sidney Powell: We've Got Pictures of Check Stubs Paid to People to Ballot Harvest (Audio)
See more...