Thousands of Pro-US South Koreans rallied today to save their historic MacArthur Statue in Inchon Park.

This past weekend an Anti-American youth rally (see disgusting picture below!) ended violently… on 9-11!

** From the sidelines of that rally, nearly 1,000 conservative defenders of the statue, many of them Korean War veterans, threw eggs and garbage at the protesters. Some blocked an ambulance carrying away injured protesters, screaming that communists didn’t deserve to be rescued. **

The US sacrificed 33,741 of its own in “America’s Forgotten War” so that South Korea could be free of Communism. It looks like Americans aren’t the only ones who have forgetten. 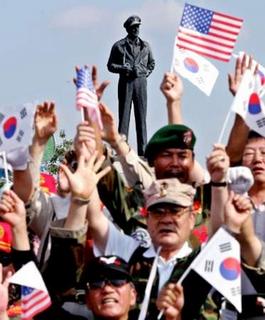 South Korean marine corp veterans and protesters shout slogans in front of a statue of U.S. Army General Douglas MacArthur in Inchon, west of Seoul, September 15, 2005. The statue had been erected to commemorate MacArthur’s historical Inchon landing operation against North Korea during the 1950-53 Korean War. Hundreds of pro-U.S. protesters and marine corp veterans held a rally to commemorate the 55th anniversary of the Inchon landing operation and protest against anti-U.S. protesters’ calls to dismantle the statue. Thousands of demonstrators who claimed that the U.S. general is a war criminal who massacred numerous civilians during the Korean War had earlier held a massive rally last weekend. (Reuters)

Thousands of Korean Marines rallied today in Inchon Park vowing to save the statue to the last man:

Marking the 55th anniversary of the Incheon Landing on Thursday afternoon in Freedom Park, Incheon, where the statue of U.S. general Douglas MacArthur stands, Marine Corps veterans resolved in a rally to safeguard the “national security and the MacArthur statue to the last man.” No clashes took place Thursday because organizations advocating the removal of the statue did not counter.

Marine Corps Veterans Association president Kim Myung-hwan told the rally attended by more than 3,000 veterans and others from across the country, “We cannot remain silent on calls for the removal of the MacArthur statue. Now Marine Corps veterans have to step forward.”

“The General MacArthur statue is an expression of our gratitude to the countries that participated in the Korean War,” said former defense minister Kim Sung-eun. “The reality is indeed so upsetting that it impels us to hold such a rally.”

Clad in Marine Corps uniforms and wearing red caps, the veterans waved Korean and American national flags and shouted such slogans as “Right!” and “Let’s Safeguard the Korea-U.S. alliance,” while listening to speeches. The rally site was filled with placards, some of which read, “Let’s decisively cope with anti-American and pro-North Korean forces that turn the cold shoulder to our national interests,” and, “Let’s leave to our posterity the fatherland we have defended with blood and sweat.” 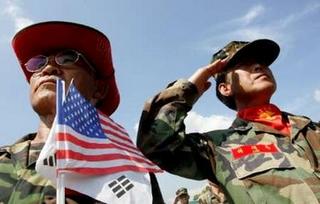 President Roh Moo-hyun on Tuesday pitched into the debate about a statue of U.S. general Douglas MacArthur in Incheons Freedom Park, saying the 1950 Incheon Landing led by the general, a turning point in the Korean War and the monument are part of our history. Roh made the remark at a meeting with Korean residents in New York at the Waldorf Astoria Hotel in Manhattan.

On Sunday, young anti-American protesters clashed with conservatives and police:

A movement to tear down the statue has been gaining momentum recently among some younger South Koreans, who call it a symbol of U.S. occupation and oppression.

On Sunday, more than 4,000 anti-MacArthur demonstrators armed with bamboo sticks clashed with an almost equal number of riot police. From the sidelines, nearly 1,000 conservative defenders of the statue, many of them Korean War veterans, threw eggs and garbage at the protesters. Some blocked an ambulance carrying away injured protesters, screaming that communists didn’t deserve to be rescued, witnesses said.

The protesters are led by a coalition of student and labor groups, including the Korean Confederation of Trade Unions and the Korean Teachers and Education Workers Union. Their argument, boiled down, is that the U.S. effort in the Korean War was not so much an altruistic defense of South Korea’s freedom as an attempt to gain hegemony over the region, and that it needlessly caused the division of the peninsula.

The drive to remove the statue has inspired a determined backlash. On Park’s Web page, furious veterans have denounced the singer as an “ungrateful commie” and suggested that he move to North Korea.

One Free Korea has the disgusting pictures and story of the Anti-American youth protest from this weekend. 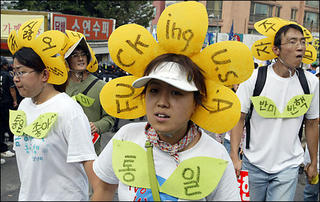 Here is one of the many pictures (take some time to read the flower petals!) at One Free Korea from a youth protest on 9-11! Joshua at One Free Korea says that the US media was watching but didn’t much seem to care!

Joshua has much on the North Korean sympathizers who protested on 9-11. This is just a piece of his excellent reporting:

It’s much more than that. A violent attack on a symbol of America on 9/11, deliberately scheduled for that day and mindful of its significance for this country, could only be construed as an implicit statement of support for the murder of Americans. And while it thus far lacks the same symbolic potency, the malicious intent was no less vile than that behind a cross burning.