“THERE WERE BRIBES, THERE WERE KICKBACKS, THERE WAS LAX OVERSITE FROM THE SECRETARIOT” SAYS JOHN BOLTON DURING TODAYS HEARING.
VIDEO HERE.

Kofi Annan responds, “The findings to today’s report must be deeply embarassing to us all.” 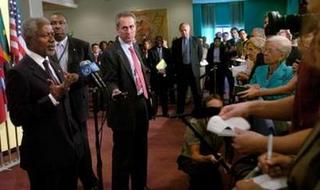 Kofi says that his son Kojo will have to speak for himself in connection with the Oil for Food probe. The report alleges that Kojo’s sporty green Mercedes was bought and shipped at super discount rates:

Kojo, son of U.N. Secretary-General Kofi Annan, got a $3,000 loan from a friend for a down payment on a sporty green Mercedes ML 320 in Geneva, Switzerland. The friend was Michael Wilson, then a vice president of Cotecna, the firm that not only employed Kojo but also won millions of dollars in U.N. contracts, including one, signed within two months after the down payment was made, to monitor the oil-for-food program in Iraq.

About the same time Wilson’s wife bought a car from the Swiss dealer, Kojo Annan wound up paying $39,000 for his Mercedes, getting $15,000 in help from his dad plus a $6,000 “diplomatic” discount by falsely claiming that his father was the car’s owner. He later shipped the vehicle to his native Ghana, again using his father’s diplomatic status to avoid paying $14,000 in customs duties. 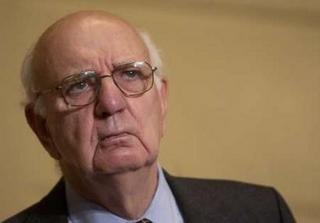 Paul Volcker, Chairman of the Independent Inquiry Committee, listens to journalists after addressing the Security Council at the United Nations in New York, September 7, 2005. (Reuters)

The Independent Inquiry Committee into the UN Oil-for-Food program said Wednesday that Russian companies had paid, via the Iraqi Embassy in Moscow, a total of more than $52 million in surcharges to Saddam Hussein’s regime for contracts under the UN program, RIA Novosti reported.

The committee said Hussein had received $225,900,000 in surcharges, and nearly 30 percent of the amount had been given to him via Iraqi embassies in different countries. The report mentioned Egypt, Greece, Italy, Malaysia, Russia, Switzerland, Syria, Turkey, and Vietnam.

Kofi essentially took the blame for the scandal but said that the role or functioning of the secretariot was unclear:

“The report is critical of me personally and I accept its criticism,” he told the Security Council after Chairman of the Independent Inquiry Committee (IIC) Paul Volcker presented the report.

He said as chief administrative officer, he had to take the responsibility for the failings revealed both in implementation of the programme and in the functioning of the Secretariat.

He also drew pointed attention of the Council members that many of these problems were rooted in an unclear demarcation of roles and responsibilities between the Council and its sanctions committee on one hand and the Secretariat on the other.

Annan expressed regret that he was not “dilligent and effective” enough in purusing investigation after he learnt that his son was employed in the company that had won the humanitarian inspection contract.

Kofi discussed the Oil for Food Scandal in depth with the BBC this past weekend. Kofi was bracing for the bad news but was looking forward to discussing the new proposals for the UN including a tax of .7% on the “rich” countries for development. The conference to discuss these changes is coming up in two weeks. After the report today, this may not be the best time to ask for “rich” countries for fork over more cash.