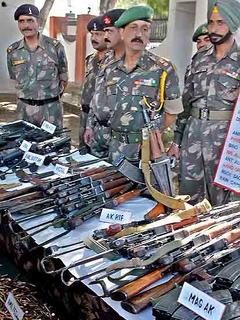 Police in Kashmir found a huge cache of weapons buried in a mountain cave on Tuesday after a firefight where 4 rebels were killed:

The army also seized night vision devices, binoculars and radio sets. “The arms and explosives were enough to equip several squads of militant groups,” the officer said. “This is one of the biggest recoveries made by the army in recent times.” The weapons found on Monday were “skilfully buried in natural caves in the mountains,” Sabharwal said.