Kanye West was booed by a stadium full of football fans for the duration of a live-via-satellite performance during the Boston-Oakland NFL Kickoff Football Game last night. His free performance was broadcast live from LA for the event.(this story did not receive national or international coverage) Kanye made racist accusations against President Bush in a nationally broadcast telethon a week ago. 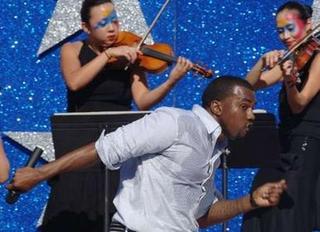 Meanwhile, Dick Cheney was heckled by a man in Mississippi while he was visiting the destruction of Hurricane Katrina. (this story received national and international coverage)

Laura Bush came to her husband’s defense today after a week of attacks blaming President Bush for the disproportionate amount of black victims in the city of New Orleans:

“I think all of those remarks are disgusting, to be perfectly frank, because of course President Bush cares about everyone in our country,” the first lady said Thursday in an interview with American Urban Radio Networks.

Over 67% of New Orleans population black or African American.

Update: (Saturday) And Drudge is reporting that on Friday morning Kanye Went Off Again on The Ellen Degeneres Show.

“They have been trying to sweep us (African-Americans) under the kitchen sink and it was so in people’s faces and so on Tv… that they couldn’t even hide it any more.”