More on the Gaza Unity Conert 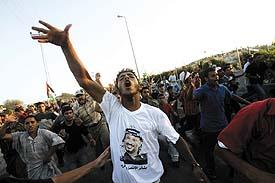 Palestinian concert-goers celebrate the evacuation of Israel from Gaza before the Kalishnikovs went off:

On stage, three fresh-faced men – hair gelled, clad in sports jerseys and baggy pants – swaggered and bobbed their heads, telling all the shabab (young men) to wave their hands in the air. The crowd swayed to the booming beat and the group PR (Palestinian Rappers) recited a song called “Al-Hurriya” (freedom), until a few angry Islamists in the back fired their Kalashnikovs in the air.

A man screamed a Hamas-inspired chant about resistance and the crowd roared back “Allahu Akbar” (God is Great). People lunged toward the stage and the sedate rally turned into bedlam.

Police fired warning shots, shoved the rappers into a cab as stone-hurling and stick-swinging teenage Hamas supporters chased after them. Furious over their escape, the mob stoned police, yelling “the national security forces have sold our blood for the dollar” and the two sides skirmished for nearly 30 minutes across Neve Dekalim.

Mohammad said the late American rapper Tupac Shakur inspired his group to make their music. All of them first heard rap music on mixed-tapes that floated through the Gaza Strip in the late 1990s.

“I loved Tupac so much. He used to rap about black people suffering from white people,” Mohammad confessed.

One of PR’s songs talks about Mohammad carrying the coffin of his friend Ibrahim who joined an armed group and died fighting the Israelis last year.

Mohammad himself was shot in his left arm throwing stones against Israeli soldiers in 2001 and it proved a wake up call for him.