After parading through Washington DC on Sunday, arm-in-arm with Cindy Sheehan, Jesse Jackson was in St. Louis yesterday speaking to the newly formed “Change to Win” union workers who recently broke off from the AFL-CIO. One of the reasons these unions meeting in St. Louis broke off from the larger AFL-CIO was the complete democratic loyalty of the larger union. With Jesse as guest speaker, it doesn’t sound like anything has changed:

The Rev. Jesse Jackson told Change to Win conventioneers Monday night that the federal government under President George W. Bush appeared to care nothing for workers and victims of the recent hurricanes — but was swiftly moving to fatten the coffers of businesses hired to deal with the aftermath.

“Bring out the money!’’ Jackson shouted, as he contended that the Republican administration had “declared martial law on workers rights.’’ He cited the administration’s decision to ignore the prevailing wage provision of Davis-Bacon, and contended that some businesses were trucking in workers from Mexico for post-hurricane building projects, while blocking American workers seeking work.

He said that Change to Win’s success depended on changing workers’ lives for the better. Change to Win is the coalition made up of seven unions, representing almost six million workers, who have broken away from the AFL-CIO. Jackson also appeared at a recent AFL-CIO convention, so he’s apparently trying to appeal to both union camps.

Does anyone ever demand that Jesse back up anything he says with facts or references? How does he get away with spouting off that “some businesses were trucking in Mexicans to do the work?”

And, wasn’t Jesse just urging an alliance between Hispanics and Blacks? I wonder how this unsubstantiated claim lashing out at Mexicans goes over with his new alliance partners? 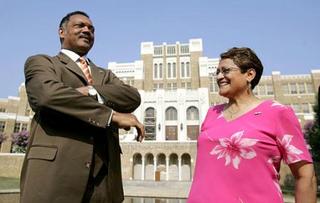 Jackson spoke in June of those who wish to drive a wedge between the Black and Hispanic communities:

“Let’s get to the heart of it. After the last census count, statistics showed that the Hispanic population was the largest minority population and there were some in the media who like to use that as a contest between winners and losers, to drive a wedge and divide our communities,” Murguia said.

While acknowledging some of their divisions, the leaders held up Arkansas as an example for strong black-Hispanic friendship. Earlier this year, state Rep. Joyce Elliott, who is black, led an unsuccessful effort to extend in-state tuition and college scholarship eligibility to the children of illegal immigrants.

But, who exactly is driving the wedge? And, will the majority of Hispanics want to jump on that victim train with Jesse?

Hat Tip Allman and Smash and the Electric Stove

Update: In other union news… The Teacher’s Union in California is having some difficulty keeping all of those rowdy members in line. Blue State Conservatives has more.