IRAQI PRESIDENT TALBANI HONORS THE US FOR SACRIFICES IN IRAQ,
VIDEO HERE

“In the name of Iraqi people, I say to you, Mr. President, and to the glorious American people, thank you, thank you. Thank you, because you liberated us from the worst kind of dictatorship.”

“Mr. President, you are a visionary, great statesman. We salute you. We are grateful to you. We will never forget what you have done for our people.”

While US and Iraqi forces decimated the terrorist stronghold near the Syrian border, Iraqis in Tal Afar protested against the terrorists who had been walled up there. 200 suspected militants were killed in the battle for the city. There were no US casualties.

Also, on Monday, Iraqi President Talabani said the US could start withdrawing as many as 50,000 troops by the end of the year since Iraqi forces are making such great progress. 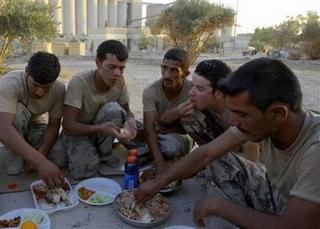 Iraqi Army soldiers take a break from the fighting in Tal Afar. These Iraqis supplement their American rations with chicken and rice while eating dinner together at a grain silo where they are staying with the U.S. Army in Tal Afar, Iraq, 420 kilometers (260 miles) northwest of Baghdad, Tuesday, Sept. 13, 2005. U.S. commanders said more than 400 people have been captured during the offensive to retake the northern town of Tal Afar. (AP)

The US suffered NO casualties in the battle.

Forty insurgents were killed in fierce clashes between militants and Iraqi troops who raided suspected hideouts late Monday afternoon. The raids were launched in response to a roadside bombing that targeted an Iraqi patrol earlier in the day, killing one soldier and wounding three, said Capt. Mohammed Ahmed, an Iraqi army spokesman in Tal Afar. Ahmed said 27 militants were arrested.

The Iraqi Prime Minister visited the city to congratulate the troops despite threats earlier from suspected internet terrorist sites that the terrorists were going to release chemical or biological weapons! 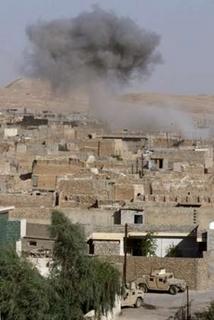 Smoke rises after an explosion during fighting in the northern Iraqi town of Tal Afar September 11, 2005. Iraq closed its border with Syria on Sunday to stop what it calls foreign fighters entering the country, as a U.S.-backed military operation to wipe out suspected insurgents in the city of Tal Afar continued. (Reuters)

On Sunday, the residents from Tal Afar protested against terrorism!

The state controlled station (Al-Iraqiya) showed a demonstration of about 150 people of Tal Afar holding banners declaring: “We call on the government to kick out terrorists from Tal Afar.” One young man told a television interviewer, “What we want from the Iraqi government is to kill those terrorists.”

Also, on Monday, the US heard more great news from Iraq…

Iraqi President Jalal Talabani said in an interview yesterday that the United States could withdraw as many as 50,000 troops by the end of the year, declaring there are enough Iraqi forces trained and ready to begin assuming control in cities throughout the country.

Remarks from Iraqi President Talabani today at the White House:

PRESIDENT TALABANI: We have had a good discussion with Mr. President. We are partners. We are proud to say openly and to repeat it that we are partners of the United States of America in fighting against tyranny, terrorism, and for democracy. It is something we are not shy to say and will repeat it everywhere, here and in Iraq, and the United Nations and everywhere.

Iraq is America’s ally in the war against terrorism. Our soldiers are now fighting side-by-side with your brave soldiers, now and every day. We have captured many senior elements of al Qaeda. We killed many of them, and we have also many of them in our prisons.

With your support, we could create a society enjoying democracy for the first time, obviously. Now Iraq is a free country. We have all kinds of democracy, all kinds of freedom of expression of parties, groups, civil society, organizations — that we can say that our democracy is unique in the Middle East.

The only problem, Mr. President, is that no matter how proud you may be to repeat your thanks to the United States and proclaim your country’s partnership with us, the American people will never hear about it–not if they rely on the mainstream media, anyway.

I sadly have to agree with John. I wrote him adding:

Actually, the MSM did report on the press conference in the East Room today with President Bush and Iraqi President Talabani. You may not have noticed it from the headlines. In the 20 minutes that the two presidents reported on Iraqi progress and gratitude for sacrifices made, the first question from the gallery concerned Hurricane Katrina where Bush took responsibility for the “federal” errors. So, the headlines today from the MSM had nothing to do with Iraq. Instead, here is one example:

That’s right! After that wonderfully uplifting press conference, that is how the MSM spins it!

The Anchoress and Joe’s Dart Blog have more on Talabani’s historic visit.