Indian Tennis Star Sania Mirza is Ranked #34 in the World. 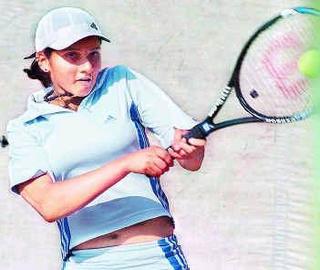 Sania Mirza will receive extra security after an Islamic group opposed her on-court dress and threatened to stop her from playing in the latest WTA event.

Massive security will be in place in Kokata for Indian tennis star Sania Mirza, ranked number 34 in the world, after she received threats claiming her tennis attire was Un-Islamic:

The tight security cover is in view of objections raised by some muslim clerics on her sporting attire.

From plain clothes detective department personnel to IPS officers, a posse of cops have been deployed at the hotel as also the tournament venue, Netaji Indoor stadium, to ensure foolproof security for the 18-year-old.

“We are not taking any chances. The commandos will be there with her whenever she ventures out of her hotel room”, said a senior police officer.

Netaji Indoor Stadium has been turned into a fortress with strong police presence and installation of door-frame metal detectors at all the gates.

Sania avoided answering any question on the matter of security. “Please stick to questions on tennis”, she firmly told a reoprter.

The security will be increased at her next outing after Muslim clerics said they would stop her from playing:

Muslim clergymen have denounced the 18-year-old player for wearing skimpy skirts and colourful sleeveless tops on court, which they say are un-Islamic.

The teenager has emerged as one of India’s most visible sporting icons following a sensational year in which she has climbed to 34 in the WTA world rankings. In a country dominated by cricket, companies are queuing up to sign endorsements with her. Mirza has refused to be drawn on the controversy over her clothes and is scheduled to play in Kolkata beginning on Monday, despite the call by a powerful Islamic group to stop her.

The group, Jamaat-e-Ulema-e-Hind, has warned that its members would try to prevent Mirza from playing if she did not wear “proper clothes.” What she wears offends Islam. She will be stopped from playing if she doesn’t adhere to it,” Siddiqullah Chowdhry, the group’s chief, told Reuters. Police are tightening security following the call. (reuters)

Mirza is from a strict Muslim family.