Some things are better than saving a pig! 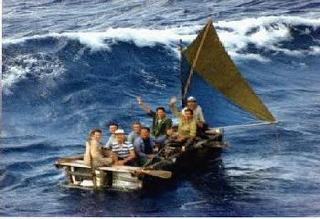 These Cubans left their pigs and goats with the villagers to take down into the shelter with them the next time a hurricane rolls in.

If only the people of New Orleans were lucky enough to live in the tropical paradise of Cuba. If only the people of New Orleans lived under the nurturing eye of Fidel Castro. Then they would be feeling no pain and only community bliss, today. According to these Leftists in America, all of the needless suffering and pain from Hurricane Katrina and other natural disasters is unheard of in Castro’s paradise:

Last September, a Category 5 hurricane battered the small island of Cuba with 160-mile-per-hour winds. More than 1.5 million Cubans were evacuated to higher ground ahead of the storm. Although the hurricane destroyed 20,000 houses, no one died.

What is Cuban President Fidel Castro’s secret? According to Dr. Nelson Valdes, a sociology professor at the University of New Mexico, and specialist in Latin America, “the whole civil defense is embedded in the community to begin with. People know ahead of time where they are to go.”

“Merely sticking people in a stadium is unthinkable” in Cuba, Valdes said. “Shelters all have medical personnel, from the neighborhood. They have family doctors in Cuba, who evacuate together with the neighborhood, and already know, for example, who needs insulin.”

They also evacuate animals and veterinarians, TV sets and refrigerators, “so that people aren’t reluctant to leave because people might steal their stuff,” Valdes observed.

During the 2004 election campaign, vice presidential candidate John Edwards spoke of “the two Americas.” It seems unfathomable how people can shoot at rescue workers. Yet, after the beating of Rodney King aired on televisions across the country, poor, desperate, hungry people in Watts took over their neighborhoods, burning and looting. Their anger, which had seethed below the surface for so long, erupted. That’s what’s happening now in New Orleans. And we, mostly white, people of privilege, rarely catch a glimpse of this other America.

“I think a lot of it has to do with race and class,” said Rev. Calvin O. Butts III, pastor of the Abyssinian Baptist Church in Harlem. “The people affected were largely poor people. Poor, black people.”

When Hurricane Ivan hit Cuba, no curfew was imposed; yet, no looting or violence took place. Everyone was in the same boat. (or truck!)

Fidel Castro, who has compared his government’s preparations for Hurricane Ivan to the island’s long-standing preparations for an invasion by the United States, said, “We’ve been preparing for this for 45 years.”

Never mind that Cuba still does not have adequate electricity, with blackouts more than 12 hours at a time, since Hurricane Ivan blasted the island earlier this year. And, don’t you love how the left just eats up the statistics that Communist dictators spew out about “no casualties” and “everyone had a pleasant community experience” and “it took the whole village to rebuild the pigshack that was the only thing flattened”… And, I am sure those bomb/hurricane shelters in Cuba were just a grand experience for the villagers, their goats, chickens and pigs!