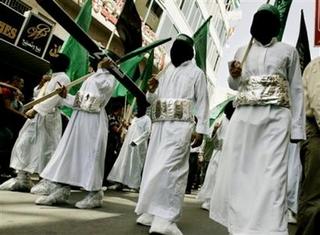 Before the explosion, masked Palestinian Hamas activists dressed in funeral shrouds as suicide bombers, march during a rally celebrating the Israeli withdrawal from the Gaza Strip, in the West Bank city of Ramallah, Thursday, Sept. 22, 2005. (AP)

At least 15 are dead and several more injured including children after a bomb blew up in a vehicle at a Hamas rally in Gaza:

Witnesses said a truck carrying gunmen and home-made weapons blew up during the rally in the Jabaliya refugee camp in northern Gaza.

Hamas has blamed Israel, but Israel has denied any involvement.

It is the deadliest incident in Gaza since Israel pulled its troops and settlers out earlier this month. 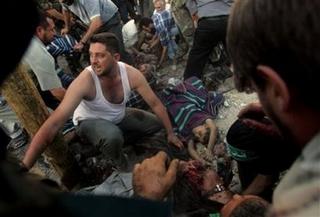 Palestinians tend to the wounded and dead including children in the street after an explosion during a demonstration by the militant group Hamas in the Jebaliya refugee camp, northern Gaza Strip, Friday, Sept. 23, 2005. A large explosion went off at a Hamas rally in this refugee camp Friday, killing at least four Palestinians and wounding 56, hospital officials said. Witnesses pulled body parts out of a vehicle that appeared to have been destroyed by the blast, which Palestinian officials said was caused when an explosive device in the vehicle went off. Israel army officials denied involvement in the incident. (AP)

A crowd swarmed the truck before the explosion:

Palestinian witnesses said a crowd, including many children, swarmed round the truck moments before the explosion.

Video filmed during the rally showed a large cloud of white smoke rising into the sky, as hundreds of people ran from the scene of the blast.

“There was smoke all over, and then we saw people in pieces, but we couldn’t make out what really happened,” eyewitness Hazem Abu Rashad was quoted by the Associated Press news agency as saying.

The agency quoted another man, who gave his name as Hussam, as saying he helped pull three men out of the truck, two dead and one alive but with a severed leg. 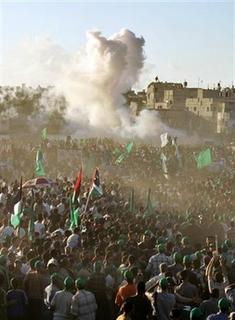 Smoke rises as an explosion is set-off during a Hamas rally in Jabalya refugee camp, north of the Gaza Strip, September 23, 2005. . (AP)

Authorities are now saying that children at the rally were among the dead from the explosion:

A pickup truck carrying masked Islamic militants and homemade rockets blew up at a Hamas rally Friday, killing at least 10 Palestinians, including children, and wounding 85, hospital doctors and witnesses said.

The rally was held in the Jebaliya refugee camp, one of the last military-style parades before a ban on flaunting weapons in public — agreed to by all militant groups — takes effect Saturday evening.

Witnesses said participants, including children, crowded around the pickup truck just before the explosion. The witnesses said the truck carried two homemade rockets.

In other news from Gaza, Hamas is thought to be working on a rocket with a 15 km range, Israeli Authorities said today.

Hamas intends to make a Weapons Museum out of an Old Israeli Synagogue in Gaza.

Jewish groups are protesting a CBC Hamas documentary as biased, but the Canadian producer denies it.

Earlier, Hamas and the Palestinian Authority shot at each other near the border crossing into Egypt. One person was injured.

Update: (10:30 PM CST) Hamas blamed Israel for the attacks but the Palestinian Fatah faction held Hamas responsible. Israel denied any connection to the blasts. Tonight 21 rockets were fired into Israel. Israel just carried out an airstrike in retalliation. And, so it goes…

Update 2: (Saturday AM) Powerline has much more on the Israeli response in their Arafatistan segment today.