PALESTINIAN LEADER MAHMOUD ABBAS SAYS THE BORDER IS UNDER CONTROL, BUT PALESTINIANS ARE STILL CROSSING INTO EGYPT UNIMPEDED,
VIDEO HERE

Hamas supporters held their Friday Prayer rally on the ruins of a Jewish Synagogue. 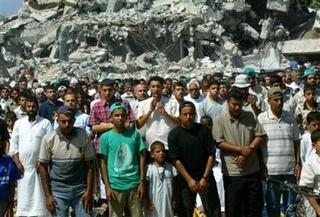 Hamas supporters take part in traditional Friday prayers in front of the destroyed synagogue in the evacuated Jewish settlement of Kefar Darom, in the central Gaza Strip, Friday, Sept. 16, 2005. (AP)

Hundreds of Palestinians are still crossing unrestricted in and out of Egypt:

Egyptian and Palestinian police fired warning shots in the air in an effort control the crowds.

On Thursday, Palestinian leader Mahmoud Abbas said the chaos at the border had been brought under control.

Since Israel’s pullout from the area on Monday, Palestinian and Egyptian security forces have failed to prevent thousands of Palestinians from streaming across the border from the Rafah refugee camp. 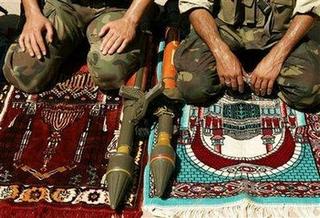 Palestinian Hamas militants conduct their Friday prayers next to their Rocket Propeled Granade (RPG) launchers during a ceremony in the former Jewish settlement of Netzarim in Gaza Strip September 16, 2005. (Reuters)

On Wednesday, a Hamas activist took the microphone from a rap singer entertaining an audience putting a quick end to the Unity Concert:

No one was hurt and the small crowd of about 2,500 people dispersed quickly. The rally was billed as a show of Palestinian unity, but most factions stayed away and Palestinian leader Mahmoud Abbas canceled his appearance.