Another view of the infamous New Orleans bus yard… 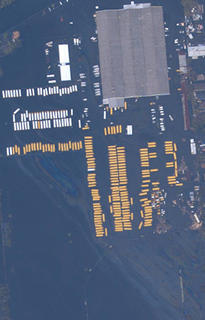 via Instapundit and Junkyard Blog

Behind the scenes, a power struggle emerged, as federal officials tried to wrest authority from Louisiana Gov. Kathleen Babineaux Blanco (D). Shortly before midnight Friday, the Bush administration sent her a proposed legal memorandum asking her to request a federal takeover of the evacuation of New Orleans, a source within the state’s emergency operations center said Saturday.

The administration sought unified control over all local police and state National Guard units reporting to the governor. Louisiana officials rejected the request after talks throughout the night, concerned that such a move would be comparable to a federal declaration of martial law. Some officials in the state suspected a political motive behind the request. “Quite frankly, if they’d been able to pull off taking it away from the locals, they then could have blamed everything on the locals,” said the source, who does not have the authority to speak publicly.

A senior administration official said that Bush has clear legal authority to federalize National Guard units to quell civil disturbances under the Insurrection Act and will continue to try to unify the chains of command that are split among the president, the Louisiana governor and the New Orleans mayor.

Louisiana did not reach out to a multi-state mutual aid compact for assistance until Wednesday, three state and federal officials said. As of Saturday, Blanco still had not declared a state of emergency, the senior Bush official said.

“The federal government stands ready to work with state and local officials to secure New Orleans and the state of Louisiana,” White House spokesman Dan Bartlett said. “The president will not let any form of bureaucracy get in the way of protecting the citizens of Louisiana.”

Blanco made two moves Saturday that protected her independence from the federal government: She created a philanthropic fund for the state’s victims and hired James Lee Witt, Federal Emergency Management Agency director in the Clinton administration, to advise her on the relief effort.

Americans for Freedom has a documented list of the failures of state and local governments. Sadly, this is just a start.

And, this post here tells of more action taken by the federal government, by the Bush Administration, that saved thousands of people of the Gulf Region! Do you think that George Bush will ever get credit for this?… I doubt it!

And, here is another post that follows the events from this past week.