Tajikistan Announces it Can Host US Base 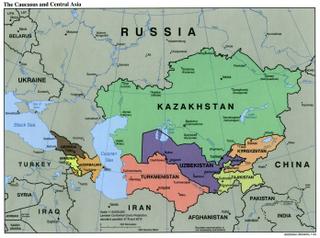 A Member of the Tajik Government’s Party said today that Tajikistan could host some of the U.S. military equipment and personnel after the United States leave their airbase in Uzbekistan:

“We were members of the anti-terrorist coalition right from the start,” Reuters quoted the first deputy chairman of People’s Democratic Party, Davlatali Davlatov, as saying. “Our position has not changed. We always say yes. We cooperate closely with the United States, irrespective of the political situation and, unlike other neighbours, we have never chopped and changed.”

The Tajik government has not commented on the statement yet. Takijistan already hosts French military aviation at its airport.

After U.S. criticism of the bloody incident in the Uzbek town of Andijan in May, Uzbekistan gave Washington six months to leave the airbase which it has used to support operations in neighboring Afghanistan since late 2001. The United States has not said whether it is seeking a replacement for the base, known as Karshi-Khanabad or K2, but it leaves U.S. forces in Afghanistan reliant on a smaller base at Kyrgyzstan’s civilian airport and bases inside Afghanistan.

Uzbekistan announced it would evict the US from use of its military base in July after the US came down on the Karimov government for a massive slaughter of civilians at a public protest in May. This week Uzbek officials continued the hostility towards the US as the government expelled two US Aid organizations that have been operating in Uzbekistan for years.