Is this really all about Gloria? 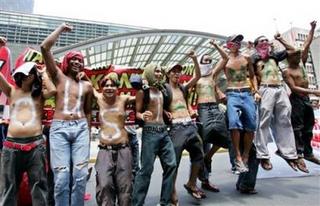 Or, is it now just about getting your picture taken by the AP?

Gloria Arroyo, a devout Roman Catholic, had her prayers answered for now as she escaped impeachment charges by High Court rulings this week:

The Supreme Court ruling Thursday that the expanded value-added tax (VAT) was constitutional, was the second key victory for a beleaguered Arroyo in a week after her allies in the House of Representatives dismissed all three impeachment cases against her.

In a separate ruling Friday, the Supreme Court refused to intervene in the congressional proceedings to save the apparently doomed impeachment cases.

The president had looked under siege in recent months as the opposition pressed home allegations of vote rigging in the 2004 polls, leading to the impeachment proceedings.

Not everyone was happy with the decision… 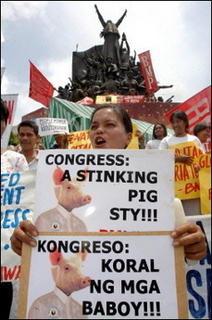 A protester denounces the Philippines Congress for throwing out the last remaining impeachment complaint against President Gloria Arroyo. The Philippines Supreme Court has refused to intervene and save an apparently doomed opposition attempt to have Arroyo removed from office for alleged election fraud. (AFP)

But Gloria has new hurdles to tackle as gas prices and inflation continue to soar in the Philippines:

With these two hurdles apparently now passed, the president and her government should enjoy some respite from political instability but she now faces a more difficult course because soaring oil prices are putting pressure on inflation and hurting the poor.

This problem could worsen if a tax exemption on oil products is done away with, as provided for under the expanded VAT law.

In a speech to World War II veterans on Friday, Arroyo called for national unity against “the specter of economic dislocation from the steepest oil price increase in history.”