Palestinian officials struggle to gain control over the chaos in Gaza. 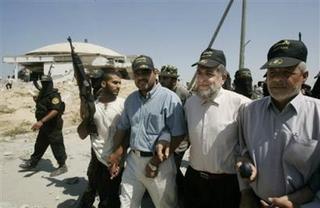 Leader of the Islamic militant group Islamic Jihad, Nafez Azzam, second from right, and other unidentified representatives of his group, walks past the partially demolished synagog of the former Jewish settlement of Netzarim, in the central Gaza Strip, Tuesday, Sept. 13, 2005. Leaders of the Islamic Jihad said their group has no plans to disarm after the Israeli withdrawal from the Gaza Strip. (AP)

Palestinian police Tuesday blocked off abandoned Jewish settlements and chased after scavengers in a first attempt to impose order after chaotic celebrations of Israel’s pullout from Gaza. The overwhelmed forces were unable to halt looting of the area’s prized greenhouses.

The chaos raised new questions about the ability of Palestinian forces to impose order in Gaza. (Hmm.)

The greenhouses, left behind by Israel as part of a deal brokered by international mediators, are a centerpiece of Palestinian plans for rebuilding Gaza after 38 years of Israeli occupation. The Palestinian Authority hopes the high-tech greenhouses will provide jobs and export income for Gaza’s shattered economy.

During a tour of Neve Dekalim, Palestinian Prime Minister Ahmed Qureia implored Palestinians to leave the structures intact, even as people scavenged through debris elsewhere in the settlement.

“These greenhouses are for the Palestinian people,” he said. “We don’t want anyone to touch or harm anything that can be useful for our people.”

Just minutes away, crowds of looters in the Gadid settlement overwhelmed hundreds of guards trying to protect the greenhouses. Guards acknowledged that in many cases, they were unable to stop the looting.

He said about 80 percent of the greenhouses were still intact, but looters walked off with lighting fixtures, cables and wires. Many were undeterred by the police presence. Police said one man dropped his loot only after he was beaten by security forces.

Israel withdrew the last of its troops from Gaza early Monday, handing control of the coastal strip to the Palestinians. Celebrations frequently spun out of control, with Palestinians setting fire to debris and the few remaining buildings in empty settlements, and thousands of people rushing back and forth across the Egyptian border.

Looters scavenged for anything of value left by the Israelis. 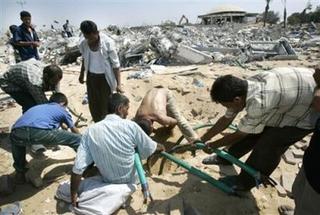 Sept. 13, 2005. Palestinian police blocked off abandoned Jewish settlements and chased after scavengers in a first attempt to impose law and order after chaotic celebrations of Israel’s pullout from Gaza. (AP)

Crowds of looters in the Gadid settlement overwhelmed hundreds of guards! 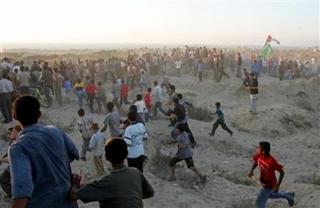 Palestinian youths run towards a fence of the Jewish settlement of Neve Dekalim, from Khan Younis in the southern Gaza Strip September 11, 2005. Thousands of Palestinians gathered excitedly on the edge of abandoned Jewish settlements in Gaza on Sunday, poised to rush in as the Israeli army prepared to get out following decades of occupation. (Reuters)

Deadly and chaotic scenes ensued as Palestinians took over the Gaza Strip for the first time, yesterday:

“It is time for our people to rejoice and to put an end to the tragedies, sadness and suffering,” Palestinian leader Mahmud Abbas said as he toured the ruins of the former settlement of Dugit in the north of the territory.

“We have made the first steps on the road to realising our aspirations and we must continue with our journey,” he added.

The day was tinged with tragedy, however, as five Palestinians drowned in once-forbidden seas off Gaza while another was killed on the border with Egypt.

Smoke spewed into the air from burning rubbish in former settlements as enormous national flags fluttered from telegraph poles while mobs of youths poured in, ransacking, looting and torching synagogues and other buildings.

The green banner of Islamic militant group Hamas, which has declared the pullout a victory for its five-year campaign of violence, was hoisted above a ransacked synagogue in Neve Dekalim, once the largest Gaza settlements.

One Palestinian was shot dead as he approached a security fence while dozens of youngsters entered no-man’s land on the Egyptian side after toppling the barbed wire fence on top of a concrete wall that marks the frontier.

Little Green Footballs had more on the Gaza “celebrations”, yesterday.
Powerline also mentioned the chaos in Gaza this morning.
La Shawn Barber has an interesting take on the Synagogue Burnings.