Hundreds of Indonesian bus drivers, vendors and factory workers staged a noisy rally in Jakarta on Sunday to protest against the government’s plan to increase fuel prices.

President Susilo Bambang Yudhoyono unveiled a plan on Wednesday to raise fuel prices in order to support the weakening rupiah which plunged to a four-year low last week as oil prices surged. 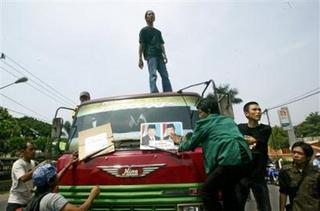 Gas prices were making headlines in Indonesia back when it was $58 a barrel. Today the price is at $70 a barrel, and Indonesia, southeast Asia’s largest economy, is feeling the effects:

Nowhere is the extent to which high oil prices are complicating efforts to raise living standards more apparent than in Indonesia, Southeast Asia’s biggest economy.

Susilo Bambang Yudhoyono is facing the biggest challenge of his 12 months as Indonesia’s president, and it is a familiar one: fuel subsidies. Indonesia’s currency is plunging as crude oil prices threaten its plans to cut the budget, eroding confidence in the government.

Not since the darkest days of 1997 and 1998 have traders fretted so much about the rupiah. Its plunge then was so destabilizing that it precipitated the ouster of President Suharto. His powerful political machine, 32 years in the making, proved no match.

The rupiah, down 9.3 percent against the U.S. dollar this year, is making headlines again. 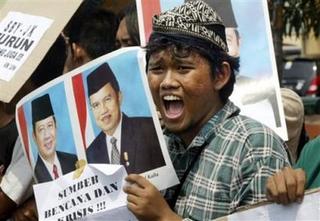 A student protester in Jakarta demonstrates against the fuel subsidy cuts by the Indonesian government. (AP)

Rising oil prices have already forced Thailand to change its economic forecast for the year:

Take Thailand, which until a year ago was seen as an economic role model for Asia. Thailand has come a long way since the dark days of 1997. It strengthened its financial system, reduced foreign debt and worked to eliminate corruption.

In just a matter of weeks Thailand went from Asian growth star to an economy being slammed by rising oil costs. It belies the government’s claims that most of Thailand’s population prospered from the 6.1 percent growth last year. So do expectations for just 3.5 percent growth this year.

Asia is affected by rising oil prices more than any other region:

What if China, whose growth carries much of the rest of Asia, slows as commodity prices rise? Or those higher costs pose a head wind for Japan, which is finally recovering from 15 years of negligible growth? Might India, Asia’s other nascent superpower, run into problems?

Asia is arguably more affected by oil prices than any other region. It accounts for about 30 percent of the world’s oil consumption, and energy efficiency in much of the region lags far behind industrialized nations. Bottom line: Oil at current levels, never mind higher ones, is a growing problem for Asia.

Bardhan said that Singh told him the Government was helpless in the face of rising global crude oil prices and had no option but to increase retail prices of petrol and diesel.

The Prime Minister also said income tax on profit of these oil PSUs had also gone down as they were making losses. “On the balance, there was nothing that the Government is gaining,” Singh told Bardhan.

HERE is a previous post on the China Gas Crisis.