US AND IRAQI MILITARY FORCES ARE COMPLETING A SUCCESSFUL SWEEP OF A PROBLEMATIC IRAQI BORDER TOWN,
VIDEO HERE

Iraqi Television has been following the 5,000 Iraqi and 3,500 U.S. Soldiers Working Together as they clear out Tal Afar.

During their searches the joint forces have discovered:
* an Underground Tunnel Network
* a Bomb Factory
* And Large Weapons Caches

An Iraqi terrorist group on Sunday threatened to use chemical weapons if the US and Iraqi forces do not leave Tal Afur in 24 hours! 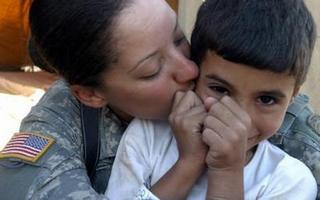 A U.S. soldier hugs an Iraqi boy at a refugee camp near the northern town of Tal Afar September 9, 2005. Iraq’s government said it launched thousands of troops against rebels in the city of Tal Afar on Saturday and ordered the nearby border with Syria closed to stem what Baghdad calls an influx of foreign fighters. (Reuters)

The US and Iraqi military are now moving unchallenged through the Iraqi border town of Tal Afar, a city of 200,000:

Thousands of Iraqi troops backed by U.S. forces are continuing their push through the northern Iraqi city of Tal Afar, an insurgent stronghold near the borders of Syria and Turkey.

Late Saturday, the U.S. military said 141 insurgents had been killed and 200 suspects captured in the area since August 26.

Separately, a U.S. military statement says coalition forces have launched an assault on what it described as a known terrorist haven in the western al-Anbar provincial town of ar-Rutbah.

Residents from Tal Afur protested in the streets to rid the town of the terrorists. The joint forces discovered a bomb factory, weapon caches, and underground tunnels:

About 5,000 Iraqi and 3,500 U.S. soldiers rummaging through the bombed-out mountain city found booby-trapped buildings, underground tunnels and large weapons caches, but they encountered little fighting during two days of operations. Residents estimated that 90 percent of the city of 200,000 had fled, many to a crowded tent camp.

The joint operation has received heavy coverage on state-controlled Iraqi television. For two days, Al-Iraqiya network has shown frequent footage from the scene of Iraqi soldiers kicking in doors as they hunt for rebels in the bombed-out city, which had been the site of insurgent attacks on U.S. and Iraqi forces.

In Baghdad, Iraqi officials have given regular updates on the fighting and announced plans to push into other cities along the border with Syria, including Sinjar, Rabiaa, Qaim and Akashat.

In a televised news conference, Defense Minister Saadoun Dulaimi praised the offensive and the conduct of Iraqi troops.

“What is happening in Tal Afar is an example of what should happen in other troubled places of Iraq,” Dulaimi said.

The government’s upbeat assessments were reflected in the footage on state-controlled television. Iraqis often criticize the nascent armed forces for firing their weapons wildly into the air. But on Sunday night, Al-Iraqiya showed Iraqi soldiers in desert camouflage uniforms alertly marching through deserted Tal Afar neighborhoods and calmly guarding a group of about 20 suspected insurgents.

The station showed a demonstration of about 150 people of Tal Afar holding banners declaring: “We call on the government to kick out terrorists from Tal Afar.” One young man told a television interviewer, “What we want from the Iraqi government is to kill those terrorists.”

The Al Qaeda linked Sunni group has threatened to use chemical weapons in 24 hours if the US and Iraqi forces do not leave Tal Afur. This is the same group that took responsibility for the stampede that killed nearly 1,000 Iraqis:

“The military bureau of Jaish al-Taefa al-Mansura (Army of the Victorious Community) has decided to strike strategic and sensitive targets belonging to the (US) forces of occupation and apostates (Iraqi government forces) in Baghdad, with non-conventional and chemical weapons” unless the Tal Afar operation is called off, the Internet statement said Sunday.

The Internet statement, whose authenticity could not be verified, said weapons “developed by the mujahedeen (holy warriors),” would be used “unless the armed onslaught against the city of Tal Afar stops within 24 hours.”

It was posted on one of the Islamist websites used by the group of Al-Qaeda’s frontman in Iraq, Abu Musab al-Zarqawi, and the Army of Ansar al-Sunna, another insurgent group linked to the Al-Qaeda network.

“God’s enemies among the Americans and their lackeys who claim to be Iraqis are at their last breath, and trying by all means to escape from the mujahedeen,” said the group, which has claimed several attacks against US forces and Iraqi policemen and Shiites.

These included a mortar attack close to a Shiite shrine in Baghdad at the end of August which killed seven people and wounded three dozen others as about one million Shiites gathered for a celebration.

The attack and rumours of a suicide bomber sparked a stampede that left almost 1,000 pilgrims dead.

Iraq the Model also reported on this chemical weapons threat.