You probably heard about how the Flight 93 Memorial planned in Pennsylvania complete with maple trees and wind chimes, looks strangely like a giant Islamic Red Crescent symbol. Michelle Malkin and Little Green Footballs have been talking about this outrageous architectural design this week. Not that a crescent is a bad idea for a monument. But, certainly not at this place and commemorating this tragic event. It makes you wonder what designs were not accepted?

Well, like Ace and Allahpundit, I’ve come up with my own counter design… 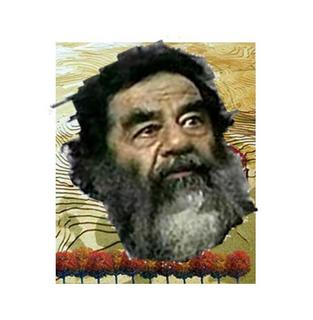 This would be the perfect design for the Flight 93 Memorial. It would please conservatives who are proud of those on board and the progress that has been made in the War on Terror since that terrible day. And it would not offend the Liberals who see no connection between Saddam Hussein and Al Qaeda. Therefore, they would not have to remember the attack, but could just sit back and enjoy the honeysuckle.

I call it “The Head from the Spiderhole”…

This living tribute in honeysuckle fields would use 93 old palace stones to spell out “Let’s Roll!” as speakers surrounding the sanctuary would blast Ethel Merman crooning “God Bless America” in the background.

If anyone asks about the strange resemblance of the patterned dogwood trees and forsythia bushes to the face of Saddam Hussein, tell them it must be mere ham-fistedness. After all, Saddam had no connections with Al Qaeda!

Tomorrow is the Anniversary of the 9-11 Disaster.

Chrenkoff wrote earlier this week on the documentary,

The Flight that Fought Back

On September 11, at 9 PM (ET/PT), Discovery Channel will screen this documentary in the United States, with other countries to follow soon (please check you local TV guides for details). Thanks to the show’s creators, I got a sneak preview and just finished watching it.

I cannot recommend it highly enough.

You simply cannot miss it. I never type in capitals to make a point, but you can take it that I am now. Extensively researched and drawing on some previously unpublished information, “The Flight That Fought Back” provides the most complete and comprehensive recreation of events onboard Flight 93. It’s a stunning, immensely moving production.

The film, part re-enactment, part interview with family members, fleshes out the stories of those ordinary men and women who had found themselves in a situation that was far from ordinary, and who performed, too, in a way that was far from ordinary. Those onboard were a cross-section of America – young and old, all races and walks of life, everymen and everywomen – they were America. The sadness at so many lives interrupted and so much potential destroyed can only be mixed with the admiration for the spirit of the 33 passengers and 7 crew members, and the hope that springs from their sacrifice.

For me, the most poignant moment came with the recollection by Tom Burnett’s wife, Deena, that Tom had been reading about Gettysburg, and had remarked to her upon the courage of soldiers who knew they were going to die, yet they marched forward against the enemy. Knowing they will never see their families again, the soldiers wrote short notes to their loved ones, and pinned them to the trees.

Those onboard Flight 93 didn’t write notes; they spoke on cell phones and left messages on answering machines, but then they, too, became citizen soldiers and laid down their lives for the greater good, saving countless others. This is the reason why the Islamofascists cannot win – because ordinary people, our brothers, sisters, parents, children, friends – can and will rise up to the challenge when the circumstances call.

Looks like a must see. I hope you plan on it!

Update: The architect of the Flight 93 Memorial has agreed to make changes to the design.