THIS IS AN EXCITING DAY FOR EGYPTIANS WHO HOPE THIS HISTORIC ELECTION WILL BE THE START OF SOMETHING NEW! VIDEO HERE

The elections in Egypt today show tremendous democratic progress for the Middle East even though they do not have quite the same intensity as Iraqi elections did in January. Egypt historically has been the cultural and political leader of the Middle East so the whole region will be watching these elections. No one could have imagined that democratic elections would be happening today in Egypt just one year ago. But, the Bush Administration has been pushing Egypt to reform its political system. And, although there are flaws with the process, this is a radical step towards democracy for Mubarak’s Egypt. 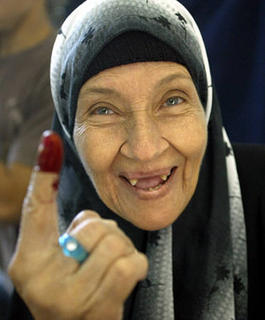 “Big Pharoah” talks about his first ever campaign rally in Cairo, complete with pictures!

“The Rantings of a Sand Monkey” also has a “last minute election roundup”!

“Freedoms for Egyptians” blog is not very pleased with the situation.

Stefania at “Free Thoughts” has also been following this historic election.

And, “Publius Pundit” will no doubt be following this election.

The BBC video is quite long, about 20 minutes. It is very US and USAID positive. And, the first few minutes you get introduced to some of the major parties and candidates in today’s elections. You also get to see some wild street rallies. The video also explains how Egypt historically has been the cultural and political leader of the Middle East and so the whole region will be watching these elections. The 77 year old Mucbarrek is, of course, expected to win. 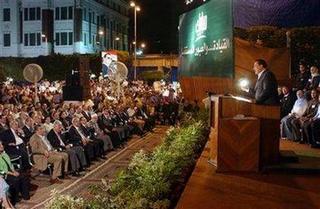 International monitors are not allowed today but independent observers fielded by the candidates will be allowed into the polling stations:

The United States, which has been pressing for democracy in the Middle East, said it had expressed concern to Egypt — a U.S. ally and a major recipient of U.S. aid — about a lack of international monitors for the election.

“We’re going to be talking to Egyptians in all walks of life, from civil society as well as political parties for their views, on how the election process unfolded,” State Department spokesman Sean McCormack said in Washington.

“We have called for Egypt to accept international monitors … Certainly, that is something that we expressed concern to the Egyptian government about,” McCormack told reporters.

The Egyptian government says the election will be fair. The Presidential Election Commission has said judges and representatives of the 10 candidates can watch voting inside polling stations, but not independent monitors.

On Tuesday, the Supreme Administrative Court ruled the election’s organisers had the right to stop rights groups from monitoring inside polling stations.

Rights groups, who say abuses have riddled parliamentary polls in the past, accused authorities of having something to hide. “I have deep doubts about whether there will be free and fair voting,” said Ahmed Samih, representing one rights group. 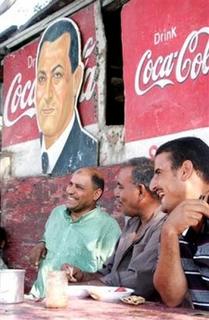 The tastse of democracy today has already whetted the people’s appetite for more:

For the first time, state-run television opened its studios to challengers. Candidates rallied crowds who were left untouched, during this special electoral time, by the truncheons of state security agents. People felt free enough to complain aloud about the creaky state of the Egyptian economy and the waste and corruption hidden in the state budget.

The exercise encouraged potential voters, in public and private ways, to gauge their own powerlessness and the dark side of an opaque system.

Voters’ lists – said to contain the names of 32 million people – are secret and Voter registration remains a cumbersome process for many people – those born before 1982 – who must register at local police stations. Egyptians born after that benefit from automatic registration.

In dozens of interviews over the past week, many Egyptians said they want to vote. Few knew if they were registered. None wished to approach police, dreaded in many communities, to find out.

“I mean, it’s change. That’s good,” said tax supervisor Mohamed Letwali during a rally held by the largest opposition group, Al-Wafd Al-Jadid or New Delegation Party. “But most people really don’t know what democracy is,” he said, echoing sentiments from dozens of Egyptians asked about the election. “Just look at the banners. People are scared to put up any banners but [those of] Mubarak.” 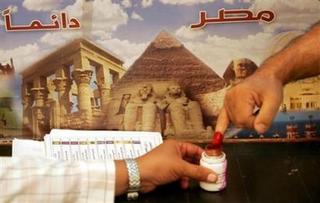 Despite it’s flaws, the elections today in Egypt may mark the end of the one man rule in the Middle East’s most populous country.

Update: (Wednesday PM) Election monitors were allowed to monitor the stations in a late call today. Irregularities were reported during the elections today but overall thecomplaints don’t sound to be c
ausing a great stir at this time.

South African News reports that the turnout for the country’s first contested presidential election on Wednesday was high after five hours of polling. 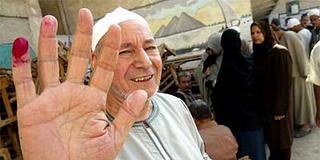 An Egyptian man shows off his inked finger after voting today in the country’s first multi-candidate elections.

The BBC notes that there is apathy with the election today but concludes that “Despite all its drawbacks, Egypt’s democratic transition appears to be working.” This is good news for the people of Egypt primarily, but also for the Middle East and for the Bush Administration who has been pushing Egypt to democratic reform of its political system.