The democrats are playing politics with corpses! (Again!)

Louisiana Democratic Governor Kathleen Blanco came unglued today about the dead in her state she says are not being treated with respect. This is totally understandable considering she hails from the party that relies so heavily on dead people come voter registration and election time. In fact, next to non-conservative blacks and gays, the democrats count on dead people as one of their most dependable constituents! 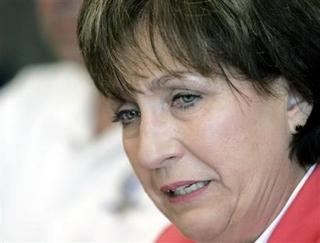 Embattled Louisiana Governor Kathleen Blanco today decided to play politics with corpses complaining the dead were not treated with respect because of the federal government! (There have been no similar complaints from Alabama or Mississippi concerning those killed by Hurricane Katrina.) In fact, this is the second time in one week that democrats played politics with dead people! Last week, before the governor and mayor were in the spotlight for thier Katrina gaffes, the democratic media insisted on photographing bodies being recovered in Louisiana and Mississippi.

The embattled Kathleen Blanco plays politics with corpses today as she blamed (you guessed it!) the government for moving too slowly in recovering the bodies of those killed by Hurricane Katrina.

The dead “deserve more respect than they have received,” Gov. Kathleen Blanco said at state police headquarters in Baton Rouge.

She said the Federal Emergency Management Agency has slowed down the process by failing to sign a contract with the company hired to handle the removal of the bodies, Houston-based Kenyon International Emergency Services.

The death toll for Hurricane Katrina climbed past 400 today.

That makes Mayor Ray Nagin only off by 96% now in his original estimate of 10,000 deaths from the hurricane.

Governor Blanco and Mayor Nagin were slow in their response to the oncoming hurricane before it hit the Gulf area. Mayor Nagin was able to send public buses “to get people to come to the SuperDome as a shelter of last resort.” But, he did not try to use those same buses to evacuate the city after the delayed evacuation orders from the governor.