Courageous Iraqis Stand Up to Terrorists

I received this email earlier today:

“A number of Iraqi loyal civilians arrested 4 terrorists who were trying to launch rockets to kill innocent people in the Al-Kademiah in the early afternoon (of wed Sept. 14).

After Al-Kademiah residents saw the terrorists preparing the rockets to be fired randomly at civilians they, over powered them, arrested them and confined them to a local house.

The civilian’s then called the Iraqi security forces who now have them in custody for questioning. This brave and heroic stance of the citizens of Al-Kademiah and their resolve to cooperate with Iraqi security forces in defeating terror and building a free, democratic Iraq free of criminals who want nothing but to kill Iraqis and return them to the dark days which buried the glow of freedom and democracy.

Join us to defeat terror by contacting one of these hot lines:

Progress towards the rule of law, freedom and democracy is unstoppable and is proliferating. You will notice that all we heard and read about are the terrorist attacks that were carried on the September 14, not the ones that were thwarted and defeated. 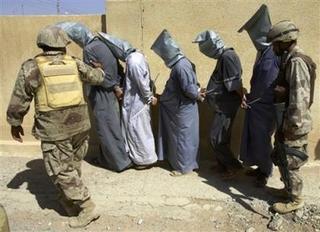 Iraqi soldiers lead away men they detained after three fellow soldiers were injured when the entered a booby trapped house in Tal Afar, Iraq, 420 kilometers (260 miles) northwest of Baghdad, Wednesday, Sept. 14, 2005. A senior American military official told The Associated Press he believed a rash of bombings in Baghdad was retaliation for the joint Iraqi-U.S. sweep through the northern city of Tal Afar in recent days to evict insurgents from their stronghold near the Syrian border. (AP)

As I was looking to fact check the above article when I came upon this great news…
Here is some terrific news from this morning (September 14th):

80% of Al Qaida in Northern Iraq has been decimated.

COL. BROWN: One of the great pieces of information we got recently is 80 percent of the al Qaeda network in the north has been devastated. And those are not our figures, those came from the last six leaders in Mosul, al Qaeda leaders that we captured; they informed us of that. We also had a letter that was captured from Abu Zaid (sp) going to Zarqawi. We recently killed Zaid (sp) and we had that letter, and it also talked about the desperate situation for the al Qaeda and the insurgents in Mosul and in the north. And then also, sources we have inside the al Qaeda network up here have also informed us of that.

And then we have the population, I think is the most significant change I’ve seen over the last 11 months, from a population clearly on the fence, not sure — they want freedom, but they weren’t really sure what freedom was, and they were clearly intimidated, to a population that clearly understands they want freedom; they are absolutely sick and tired of the terrorists, the brutal acts against innocent civilians, and they want a brighter future for their children. And we’ve got a lot of statistics to back that up. Like when we first got here in October, there was — no hotline existed. We opened a hotline; we got about 40 calls a month prior to January. The last six months, we’re up to 400 calls a month. Every day the citizens are stopping us on the street telling us where a potential suspicious individual is who may be a terrorist, and telling us where they tried to plant IEDs and those type of devices. So the population is clearly very confident.

Also, I’m out — I was out every day over the last 11 months on the ground, and great news about elections up here. You know, we went from last January we weren’t sure if we could even have elections. Right now, 80 percent of the folks on the street in Mosul and Nineveh province in the north here say that they will vote. And very interesting — these are — many of the folks I talked to are Sunnis who are very upset that they were lied to last election, told not to vote, and they were very excited to vote this election. And I think the biggest challenge is going to be getting enough ballots to the polling sites because so many people want to vote up here…

And I saw people who were on — whole neighborhoods that were on the border of, well, what do we do — a lot of them Sunnis, in fact — and after they saw the killing of innocent women and children by these cowardly suicide bombers, they turned and absolutely supported their government and are excited to vote. And as I said, 80 percent say they’re going to come and vote.

This whole article posted at the US Department of Defense website, is very informative on the situation in Northern Iraq and is, of course, not reported in the mainstream news.

An Iraqi politician this week attended the Fifth Annual Conference on Terrorism’s Global Impact, hosted by the Interdisciplinary Center in Herzliya in Israel. He was one of the few representatives from the Muslim world.

An attempted assassination and the death of his two sons in a terrorist attack – all of which followed his first visit to Israel last year – did not deter Iraqi politician Mithal al-Alusi from returning again this week to speak about the importance of standing firm against terror.