Corpses Stacking Up in Zimbabwe

** The fuel crisis in Zimbabwe is causing bodies to stack up in the morgues. People do not have the gas available to drive their cars to collect the bodies for burial! **

Just when you thought things could not get any worse… 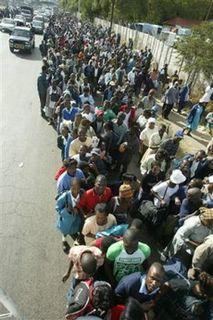 As the country plunges into economic crisis workers in Harare, Zimbabwe face long lines at the bus stop.

Corpses are piling high in Zimbabwean mortuaries since the gas shortage in the country. Zimbabweans simply do not have enough petrol for their vehicles to go collect their dead family mambers from the morgue.

A privately-run newspaper said scores of bodies had not been collected from provincial hospitals in Bindura, Marondera and Masvingo, among others.

At least 51 corpses are lying in the mortuary at Masvingo Provincial Hospital in southern Zimbabwe, despite the fact it is only supposed to hold a maximum of 17 bodies, the paper said.

Zimbabwe is in the grip of its worst fuel crisis ever. Almost all fuel stations have run dry, and only motorists with access to foreign currency are allowed to purchase fuel coupons at five stations still serving the precious commodity.

In rural areas, long lines of dusty cars sit outside fuel stations for days, waiting for a possible fuel delivery.

Shonhai said part of the blame also lay in the slow pace with which the authorities are carrying out paupers’ burials.

Zimbabwe’s hospitals are being stretched to the limit by HIV and Aids, which kills at least 2 000 people a week.

Zimbabwe gets its phone disconnected! The South African Phone Company disconnected service to Zimbabwe for failure to honour a $18-million debt. This is seen as further evidence of Zimbabwe’s foreign currency problems and the breakdown of services under President Robert Mugabe’s hardline rule.

Zimbabwe halved the debt it owes to the International Monetary Fund this week. The Board is meeting September 9th to consider Zimbabwe`s expulsion over the debt, which the country had been unable to repay since 2000 due to lack of foreign currency. The IMF has already started the process of expulsion for Zimbabwe. This would close virtually all access to foreign capital for Zimbabwe. 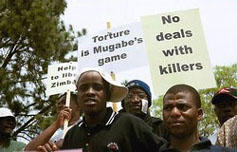 A Zimbabwean Human Rights activists came out against the constitutional amendments approved by Mugabe’s Ruling ZANU-PF Party in Parliament on Tuesday:

Describing the proposed changes to the constitution as the “worst piece of legislation yet”, Joseph James, president of the Law Society of Zimbabwe, said lawyers “across political and ideological lines” had, for the first time, taken a stance against the new legislation.

The law society is considering taking its protest to either the African Commission on Human Rights or the Supreme Court in Zimbabwe, which also functions as the Constitutional Court.

James pointed out that the 22-clause Constitutional Amendment Bill abolishes freehold property titles; removes the landowner’s right to appeal expropriation; usurps the authority of the courts, and will restrict the movement of Zimbabweans.

The bill also seeks to reconstitute parliament as a bicameral legislature, consisting of a 60-seat senate and a House of Assembly. The new senate will not have the authority to initiate legislation, but can review legislation proposed by the assembly.

Forty-five of the 60 members will be elected to the house in elections to be held in October. Each province will elect two senators – the remaining 15 will be nominated with the final approval of the president, which critics have alleged will be used to reward loyalists.

Robert Mayer from Publius Pundit has more thoughts on the Constitutional Crisis in Zimbabwe.