US Secretary of State Condoleezza Rice turned down a dinner invitation saying there was no slight intended, at the UN Summit with other women foreign ministers citing a busy schedule: Madeleine Albright, Bill Clinton’s secretary of state, started the tradition. 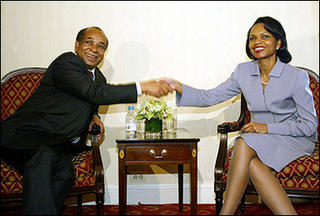 Condoleezza Rice met with Libyan Foreign Minister Abd al-Rahman Shalgam(L) during a meeting at the 60th session of the General Assembly at the United Nations. (AFP)

Condoleezza Rice said on Saturday that the US is committed to closer ties with Libya as she spoke with the Libyan Foreign Minister in New York at the UN Summit:

Rice met with her Libyan counterpart on the sidelines of the U.N. General Assembly meeting, nearly a month after the Bush administration suggested Tripoli could expect diplomatic recognition if it cleaned up its record on human rights and terrorism.

She “reaffirmed the U.S. commitment to working to broaden and deepen the relationship between Libya and the U.S.,” according to a statement.

But she also stressed the need for more progress on democratic and human rights reforms, a spokesman said.

“Good faith actions on their part will in return get good faith actions from the United States and we’ve seen that progression over the past year or so,” State Department spokesman Sean McCormack said.

Libya’s Foreign Minister Abdul Rahman Shalgam reiterated his country’s promise to continue its help in the fight against terror and to renounce violence targeting civilians regardless of their views. 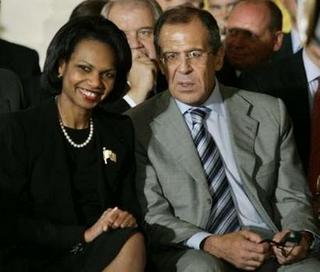 Condoleezza in her maiden speech at the World Body, urged the UN on Saturday to be firm with Iran over its nuclear ambitions:

Rice urged Tehran to resume nuclear talks that broke down last month with the Europeans or the Security Council should intervene.

“When diplomacy has been exhausted, the Security Council must become involved,” Rice said.

Tehran insists its atomic program is for civilian energy purposes but the United States and other Western powers say it is aimed at building nuclear weapons.

“It (the United Nations) must be able to deal with great challenges like terrorism and nuclear proliferation, especially when countries like Iran threaten the effectiveness of the global nonproliferation regime,” Rice said.

Iran’s Leader Ahmadinejad immediately attacked the US after Secretary of State Rice’s speech accusing the US of violating nuclear treaties and accused the U.S. of bullying others and attempting to divide the world into “light and dark countries,” repeatedly clenching his fist and jabbing his finger in the air for emphasis during his speech. 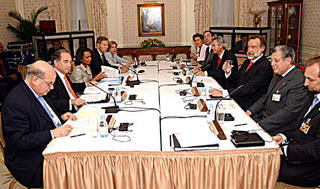 U.S. Secretary of State Condoleezza Rice, holds a meeting on Haiti, during her travel to New York for the UN 60th General Assembly (Dept. of State)

Kofi Annan defended the modest reforms proposed at the international summit but Secretary of State Rice said the UN needed nothing short of a “revolution” to deal with the challenges of the 21st Century:

The summit endorsed a document mapping out approaches to poverty, terrorism, human rights and management of the U.N. but it was a much diluted blueprint after months of wrangling between developing nations and the West.

Having said on Wednesday that members had failed to achieve the fundamental reform he believed was needed, Annan sought on Saturday to highlight the positive.

“Progress has been made across a broader front than on any other single occasion in the 60-year history of the organization,” Annan said.”

But the document fudged a definition of what constitutes terrorism, reached no agreement on how to deal with the spread of weapons of mass destruction and did little on far-reaching reforms to the U.N.’s bureaucracy or its decision-making.

Rice, in her maiden speech to the General Assembly, said the United States wanted to see fundamental reform.

“For this institution to become an engine of change in the 21st century, it must now change itself. The United Nations must launch a lasting revolution of reform,” she said.

Rice urged leaders to adopt a comprehensive anti-terrorism treaty that would include a definition of terrorism outlawing attacks on civilians. The document deleted this definition, although it condemned terrorism in all its forms.

“No cause, no movement and no grievance can justify the intentional killing of innocent civilians and noncombatants,” Rice said. “This is unacceptable by any moral standard.”