RICE DEFENDS BUSH AS SHE INSPECTS HER HOME STATE OF ALABAMA,
VIDEO HERE

Condi brought her southern charm back to Alabama on Sunday. 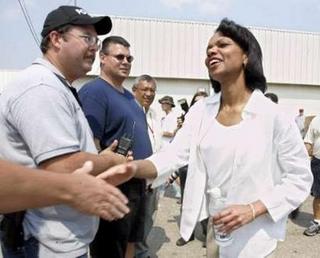 U.S. Secretary of State Condoleezza Rice (R) greets police officers during a visit to the Bayou LaBatre Community Center in Bayou LaBatre, Alabama September 4, 2005. Rice on Sunday toured areas of her home state hit by Hurricane Katrina and disputed claims her government had been slow to respond because most of the victims were black. Rice, the most senior black member of President George W.Bush’s Cabinet, said she did not believe race had anything to do with how quickly the government reacted to Katrina, which killed thousands and displaced millions along the Gulf coast. (Reuters)

The highly respected Secretary of State addressed reporters today on her trip to Alabama and spoke against the racist attacks on President Bush:

“Nobody, especially the president, would have left people unattended on the basis of race,” the administration’s highest-ranking black said as she toured damaged parts of her native Alabama.

Later, during a service at the Pilgrim Rest AME Zion church outside Mobile, Rice nodded in agreement as the Rev. Malone Smith Jr. advised the congregation, “Wait for the Lord.”

Her visit came as some black leaders, including the Rev. Jesse Jackson, have complained bitterly about the slow response to the disaster, whose victims have been disproportionately black and poor. They have said racial injustice was a factor in the government’s slow relief effort.

“How can that be the case? Americans don’t want to see Americans suffer,” Rice said. “Nobody, especially the president, would have left people unattended on the basis of race.”

Since Katrina struck, an estimated 70 nations, from Azerbaijan to Venezuela, have offered hundreds of millions in cash donations for the federal government to relay to the American Red Cross, Rice said.

The Secretary of State was warmly welcomed back to her home state. 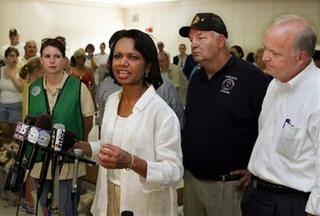 Surrounded by local officials and volunteers, Secretary of State Condoleezza Rice answers a question during a news conference Sunday Sept. 4, 2005 at the community center in Bayou La Batre, Ala., that has been turned into a relief center for victims of Hurricane Katrina. (AP)

Condoleezza also took time to thank the world community for their response and offers to help with the Katrina disaster:

U.S. Secretary of State Condoleezza Rice says the United States wants to express its “heartfelt thanks” for the “warm and passionate” response from the international community and its offers to help the victims of Hurricane Katrina.

The hurricane and subsequent flooding has devastated parts of Louisiana, Mississippi, and Alabama and left thousands hungry and homeless.

In a September 2 statement, the secretary said countries from every corner of the globe, as well as international organizations, have offered assistance, as have private citizens worldwide who want to donate personal funds to help. Those private citizens, she said, should make their contributions through the international Committee of the Red Cross.

Secretary Rice spoke more on the contributions from foreign governments yesterday as she spoke with reporters. Rice spoke highly of the United Nations efforts:

Recovery officials have received and used helicopters from Singapore and Canada rescue efforts, Rice said, as well as Air Canada planes for evacuations from the stricken area.

Finland has been providing logistics experts; Italy and Germany have provided ready-to-eat meals; and Canada has provided pharmaceuticals, the secretary said. In addition, emergency supplies have been received from Mexico, the United Kingdom and Japan, while Greece has provided ships for housing displaced persons.

The United Nations, the secretary said, has sent disaster relief experts to work with officials from the Federal Emergency Management Agency (FEMA). “I just want to say we really appreciate the way that [United Nations] Secretary-General Kofi Annan, the spirit in which this was offered, and he said the United States has been generous so much, we need to be generous to the United States.”

“And we’ve received offers of assistance from some 70 countries now, countries as powerful and big as France or China, and as small as the Bahamas, or one of the most touching ones for me was Sri Lanka, which is still recovering from its own natural disaster.”

Kofi Annan shares his warm wishes of recovery with the United States as he braces himself for more criticism from the Oil for Food report that is due out on Wednesday.