Chavez Calls US a Terrorist State

Chavez calls US a Terrorist State at UN. 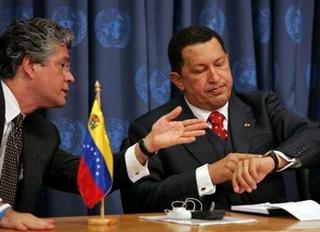 Venezuelan President Hugo Chavez (R) checks his watch as a UN official tells him he has run out of time, during a press conference on the second day of the 2005 World Summit and 60th General Assembly of the United Nations in New York September 15, 2005. When Chavez kept talking, the presiding diplomat passed him a note that his time was up. The Venezuelan leader threw the note on the floor and said if Bush could speak for 20 minutes at Wednesday’s opening session, so could he. (Reuters)

Hugo Chavez also says to move the UN to Jerusalem. Hmm… Would it be OK if we cut our funding some, then?

Was that Michael Moore, Barbara Boxer, Ted Kennedy, or Hugo Chavez speaking at the UN Summit today in New York? It was hard to tell. It must worry the democrats in this country that the Marxist Leader of Venezuela is repeating their talking points word for word… or, maybe not!

Hugo Chavez urged the UN to Escape from New York today in his speech at the World Body.

Venezuelan President Hugo Chavez denounced the U.S.-led war in Iraq on Thursday and told world leaders they should consider moving the U.N. headquarters out of the United States because of it. The leftist leader said the fact that the war was fought without U.N. authorization showed that Washington has no respect for the world body.

“There were never weapons of mass destruction but Iraq was bombed, and over U.N. objections, (it was) occupied and continues being occupied,” said Chavez, who appeared to step up his frequent criticism of U.S. policies in his speech to the General Assembly at a U.N. summit.

“That’s why we propose to this assembly that the United Nations leave this country, which is not respectful of the very resolutions of this assembly,” he said.

Allegations that Saddam Hussein had weapons of mass destruction were one of the main justifications by President Bush’s administration for the war, but non-e have been found since the Iraqi dictator’s ouster.

World leaders had been asked to speak for five minutes, and when Chavez kept talking, the presiding diplomat passed him a note that his time was up. The Venezuelan leader threw the note on the floor and said if Bush could speak for 20 minutes at Wednesday’s opening session, so could he.

When I hear comments like this, I always wonder what President Talabani and the other Iraqis are thinking of what was just said.

And, AP Writer Nick Wadhams says that the World Leaders are “demanding” the United Nations to play a bigger role on the world stage — in everything from the fight against terrorism to protecting immigrant rights to easing the crunch caused by high oil prices. “And a U.N. treaty to fight global corruption got its 30th ratification, triggering its entry into force in 90 days.” Wouldn’t you think that the UN would get its own corruption under control before it goes out to police the world?