Respecting the multicultural desires of Canadian culture, a report released by a former minister recommends Sharia Law for its progressive population. Protests were organized yesterday with a smattering of opponents rallying against the proposed laws. 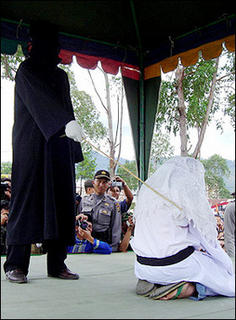 An Acehnese executor flogs a convicted woman in Takengon, in Indonesian central Aceh province, 19 August 2005 after an Islamic sharia court ordered four women to be flogged for petty gambling offences. (AFP) That may be a rough path to follow since the average Canadian household gambles $840 a year!

Protests were held in Toronto yesterday against the proposal to allow Sharia law in Canada:

Islamic law could be used to settle civil and marital disputes under a proposal made by former Ontario Attorney General Marion Boyd.

Ontario Premier Dalton McGuinty has been examining the Sharia recommendation since December and has only promised that the government will take a decision “in keeping with the values of Ontarians and Canadians”.

Ms Boyd argues that if Sharia is not allowed, all religious arbitration bodies could be abolished.

So is Sharia a Canadian Value? 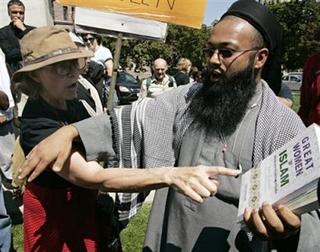 A woman points out that the book Mubin Shaikh is referring to about women was written by a man during a protest against Sharia law in Toronto, Thursday Sep. 8, 2005. (AP)

In a brain teaser, the Ontario Premier promises women’s rights won’t be compromised by Sharia law

Ontario Premier Dalton McGuinty promises the rights of women will not be compromised if the province allows Muslims to use Sharia law to settle civil and marital disputes. (?)

A report by former NDP attorney general Marion Boyd recommends Ontario allow Muslims to establish Sharia-based tribunals similar to Jewish and Catholic arbitration bodies. McGuinty says the Liberal government is reviewing Boyd’s report and will come forward with its own recommendations “at some point in time.”

He says whatever the province does, “it will be in keeping with the values of Ontarians and Canadians.”

But when asked what he meant by that, McGuinty said people will just have to be patient. 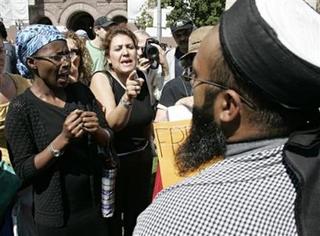 Mubin Shaikh spent the protest in Toronto arguing the benefits of Sharia law _ the Muslim code of conduct by which all Muslims must abide. (AP)

Ontario may have the designation of becoming the first province to allow Sharia Law in the West:

If the tribunals go ahead, Ontario would become the first place in the West to use Sharia law — something opponents say threatens the country’s secular legal tradition and risks curtailing women’s rights.

The province is due to rule in the near future on the possibility of such hearings, provincial prime minister Dalton McGuinty said Wednesday.

He insisted that any such tribunals would have to conform to the Canadian Charter of Rights and Freedoms — the cornerstone of the country’s 1982 constitution, which he said enshrined women’s rights.

The demonstrations were peaceful and generally small, ranging from a couple dozen to a few hundred peope. Hmm. It doesn’t sound like there’s much of an outrage.