Bill Clinton avoids the tough questions while Yahoo Chief Jerry Yang says Yahoo was just complying with local laws in passing the information that helped in jailing a Chinese journalist. 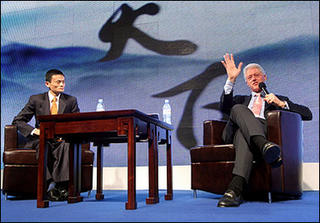 Bill Clinton answers questions after his talk at the Fifth China Internet Summit in Hangzhou, China on Saturday. Clinton avoided speaking of Shi Tao, the blogger recently sentenced in China to 10 years in jail. (AFP)

Bill Clinton spoke at the China Internet Summit in Hangzhou, China on Saturday but did not address the Chinese blogger recently sentenced to ten years in jail. Shi Tao’s crime was that he disclosed the press gag order concerning discussion of the Tiananmen Square Massacre. President Clinton also avoided discussing the recent outcry over the revelations that American corporation Yahoo! Holdings helped Chinese officials in convicting Shi Tao earlier this year. Yahoo! Holdings owns 40% of Alibaba.com who sponsored the summit. 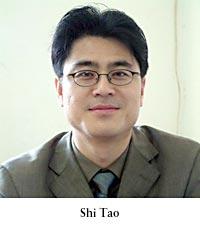 Shi Tao (an independent poet, and journalist) was sentenced to 10 years in prison on April 27 for “illegally providing state secrets abroad”.

He had posted on the Internet a government gag order prohibiting the state press from commemorating the 15th anniversary of the bloody crackdown on the 1989 Tiananmen democracy protests.

“Internet companies must be open on where they stand with respect to their human rights obligations,” said the Paris-based Reporters Without Borders.

“President Clinton is a good ambassador to relay this message and has a valuable opportunity this Saturday.”

“The role that Yahoo played in securing Shi Taos conviction does damage to Yahoo’s brand name.”

The New York-based group Human Rights in China also weighed in, urging Clinton to bring China to task over its commitments, under the Beijing 2008 Olympics Action Plan, to encourage a free and open information society.

China’s People’s Daily Online made no mention of the recent uproar at Yahoo Holdings but mentioned that Clinton said he got information about AIDS and the malaria situation in the world from the Internet, including a large amount of information publicized by the Chinese government.

Also, at the China Summit Yahoo Chief Jerry Yang spoke to reporters about the help his company provided the Chinese Authorities. (via Drudge)

Yang, speaking at the Alibaba China Internet Summit here, also said he wasn’t happy with the 10-year sentence to journalist Shi Tao, jailed for passing on a government censorship order through his Yahoo e-mail account.

“We did not know what they wanted information for, we are not told what they look for, if they give us the proper documentation in a court order we give them things that satisfy local laws,” Yang told journalists

“I don’t like the outcome of what happened with this thing, we get a lot of these orders, but we have to comply with the law and that’s what we need to do.”

I have just lost a lot of respect for Yahoo after that comment!

Update 2: Democracy Project has even more on this today and talks about President Clinton’s response to criticism of his talk.