BOMBS GO OFF IN A CROWDED LAHORE MARKET,
VIDEO HERE

At least six people were killed as two bombs went off in a crowded Lahore market today. Authorities fear that the death toll may rise as many of the wounded are in serious condition. Upset with President Musharraf’s crackdown on madrassas and his meeting with Jewish leaders in New York, hardliners are suspected to be behind the bomb blasts. 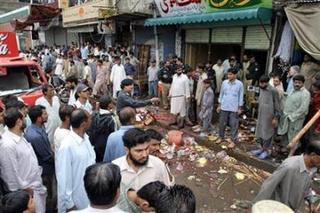 Pakistanis gather at the site of a bomb explosion at a market in the eastern city of Lahore September 22, 2005. (Reuters)

At least six people have died in two explosions in crowded areas of Lahore, Pakistan, today. Four of deaths were at a fireworks shop near the explosion.

Police said on Thursday that the first bomb, planted under the seat of a bicycle, went off near a crowded public park near the historic Minar-e-Pakistan monument. They described the bomb as a “locally made high-intensity time device”.

The explosion was triggered to hit rush hour traffic and caused a stampede by hundreds of panicked people inside the Manto Park, although none were injured.

About 90 minutes after the first explosion, a second bomb went off in a commercial district of Lahore, outside a jewelry shop.

Lahore police chief Tariq Saleem Dogar said the “bomb exploded near a cigarette kiosk and it triggered an explosion in a nearby fireworks shop … four people were burned to death instantly and up to 20 people injured. 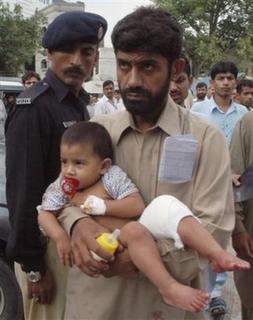 A Pakistani man tends to his baby girl after treatment at a local hospital. She was injured in the market bomb blasts this morning in Lahore, Pakistan. (AP)

Police say they are probing into links to hardline groups who were upset with Prime Minister Musharraf’s historic meeting this week with Jewish Leaders in New York:

Security was tightened across Lahore while investigators said they were probing various leads, including links to Islamic hardliners angered by President Pervez Musharraf’s recent crackdown on extremist groups.

The first bomb went off near the historic Minar-e-Pakistan monument in a crowded area of the city, killing a street vendor and wounding 13, Lahore police chief Tariq Saleem Dogar told AFP on Thursday.

Minutes later a second device detonated near a cigarette kiosk in Icchra, Lahore’s busiest shopping district, triggering an explosion in a nearby fireworks shop, police said.

Musharraf has taken tough action against extremist groups in recent years and launched a fresh crackdown after possible links emerged between religious schools in Pakistan and the July 7 London suicide bombings. 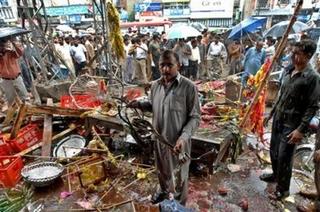 Pakistani police officials and pedestrians gather at the site of a bomb explosion at a market in the eastern city of Lahore September 22, 2005. (Reuters)

President Musharraf met with the Council For World Jewry in New York City on September 17, 2005, where he became the first leader of a Muslim nation with no diplomatic relations with Israel to hold a public dialogue with Jewish leaders. Musharraf has also cracked down on madrassa schools since the tube bombings in London. Both of these moves have been unpopular with the Islamic hardliners in Pakistan.