WHAT THE MEDIA SAID ABOUT THE BIG APPLE CONCERT,
VIDEO HERE

So is the MSM protecting their audience? Or, the artists? Or, the whole music scene by not talking about the politics at this fund-raising concert?

Another concert… Another political rally! 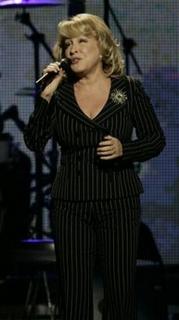 Bette Midler is one of the latest Hollywood Stars who can’t control her Far Left vocal chords even at a concert to help hurricane victims. The world not knows that George W. Bush, is not the “Wind Beneath Her Wings!” (AP)

As Drudge Report reported earlier today, a constellation of “personalities” gathered at Madison Square Garden to raise money for Katrina victims. And for those who could not control themselves, to Bash Bush and praise ex-president Clinton who made a surprise appearance:

But a few artists angrily denounced government officials for their slow response to Katrina’s devastation. “I Wish New Orleans was dry and Washington was underwater,” said Tom Waits. Bette Midler had even stronger words: “I got a letter from the Republican Party the other day. I wrote back, ‘Go f*ck yourself.'” She then added, “George Bush is a fan of mine — he came to see me in the Seventies. His coke dealer brought him.”

There was nothing but love for one former Oval Office resident, however: Bill Clinton’s surprise appearances at both concerts were greeted with long standing ovations. He spoke of the urgent need to get money to the hurricane victims, and reminisced that “the first time I saw a building over two stories tall was in New Orleans, when I was three years old.” He then introduced John Fogerty, who Clinton said “captured the soul of New Orleans,” despite being born in Northern California.

Most of the media shied away from reporting on the atrocious behavior but AFP had this to say:

Although the government response to the Katrina disaster was slow and clumsy, criticism of the authorities was largely muted — except for Bette Midler, who blasted the government for its “ineptitude, stupidity,” as well as its role in “inequality, global warming, (and) destruction of the wetlands.”

My word! Did she even sing? Or, did she just stand up there and rant?

The New York Times said that Bette’s remarks were not well received:

The politics of New Orleans’ plight were not entirely sidelined. Bette Midler said, “I could stand up here and talk for hours about ineptitude, stupidity, blame, inequality, global warming, the dangerous destruction of the wetlands, but if I did what would all those other people have to talk about?” She was loudly booed after mocking President Bush.

If you’d like to know for yourself how crazy things got, you will soon be able to purchase the video of the event. Oh, goodie!