Al Qaida takes responsibility for the stampede that killed hundreds…
but, guess who gets the blame? 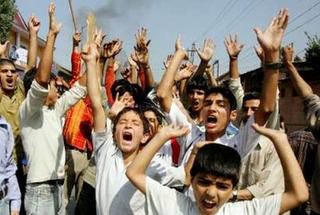 In Iraq mourners begin to bury the dead as the death toll climbs towards 1,000. 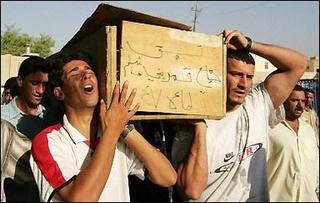 Iraqis carry the coffin of a relative in Baghdad. Mass funerals were being held across in Iraq for many of the nearly 1,000 Shiite Muslim pilgrims killed by a stampede on a bridge over the Tigris River.(AFP)

The largest loss of life since one of Saddam’s mass murders(although it’s not quite put this way in the mainstream media):

Thousands of grieving people continued the grim search for loved ones on Thursday, as bodies were still being pulled from the river and refrigerated trucks had been brought in to handle the overflow from the morgue at a nearby hospital.

The death toll from the tragedy stood at 965 in what was by far the largest single loss of life in Iraq since the US-led invasion in 2003.

Most of the dead were women, children and the elderly, who were crushed to death, trampled underfoot or drowned Wednesday as panic swept through a massive crowd sparked by rumours of a suicide bomber in their midst.

An Al-Qaeda-linked group calling itself the Jaiech Al-Taifa Al-Mansura (Army of the Victorious Community) claimed it carried out the attack on the mosque to “punish the genocides committed against Sunnis.”