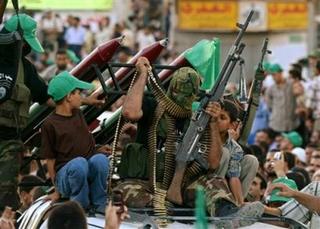 Palestinian militants from the military wing of Hamas carry children with them as they march in Gaza city September 18, 2005. Thousands of armed Hamas militants marched through Gaza City on Sunday, defying efforts to remove unauthorised weapons from the streets just days after the Palestinian president vowed not to tolerate armed chaos. The demonstration came a week after Israel completed a military withdrawal from the coastal Gaza Strip in a move praised by Washington as a possible springboard to peacemaking. 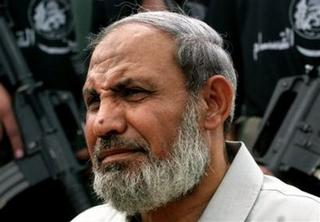 Yes, it is true, he says. “A pair of men from al-Qaeda has infiltrated into Gaza. And other contacts happen by telephone with the centers of the organization in a foreign country.”

Mahmoud az-Zahar, the most prominent political leader of Hamas, and spokesperson after the Passover bombing in 2002, admits openly that al- Qaeda is putting down roots in Gaza.

Where exactly? “Among the Popular [Resistance] Committees, which collect the militants of various organizations.”

Palestinian citizens clashed with police early on Monday at the Egypt border.

The witnesses said that the Palestinian citizens attempted to enter the Egyptian territories and cross the fence built along the borders.

The Palestinian policemen and security members fired warning bullets in the air to oblige those infiltrators to turn back, however, the mass responded by throwing stones and rocks at them.

A security source in the Palestinian Interior Ministry confirmed the clash, saying that no casualties were reported.

Also, on Sunday it was confirmed that the Palestinian Authority is using children to smuggle drugs across the border with Egypt:

The Palestinian Authority admitted on Sunday that children were being used in the smuggling business along the border between Egypt and the Gaza Strip.

“Drug dealers are exploiting children to bring in various types of drugs,” sources in the PA Interior Ministry said. “We will take drastic measures against these criminals, who are using the children and exploiting the chaos near the border.”

According to the sources, PA policemen deployed along the border in the past 48 hours have arrested a number of children who were carrying drugs in schoolbags. “The children were unaware of what they were carrying, but they gave the security forces important details about those responsible,” the sources added.