The Polling Places Are Now Open!
* Record turnout is expected in spite of the threats and violence
* There have been attacks on soldiers on Saturday
* 20 terrorists were arrested planning to kill thousands with a dam explosion
* A warehouse was fired on earlier today
* And, just in… the elections took place without much violence!

Afghanis look to set history today as they vote in their first democratic Parliamentary Elections! 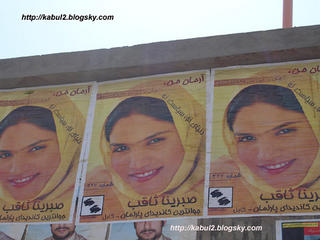 This photo was taken by Afghan Lord who has The Best Afghanistan Election Pictures on the Web!

The streets in Kabul have never been brighter with all of the election posters!
Yet, one of the candidates stands out!

In Kabul, people argue about who has the best poster – the distinctive yellow background and attractive face of Sabrina Saqeb, the youngest candidate, gets many people’s vote.

** “Her posters are driving our youth towards sin,” thundered the Dari language Cheragh newspaper. “It is a political weapon against true Islamic voters.” Other candidates have been more viciously attacked. **

(Actually, I saw the poster of Sabrina yesterday on Afghan Lord’s site. It was hard to miss. So today when I was reading the BBC I knew exactly which poster they were talking about. I believe Will Franklin, A. M. Mora y Leon and Robert Mayer will have to add Sabria (or Sabrina) to their Democracy Babe archives!) 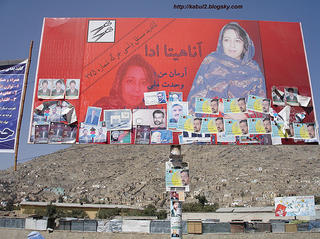 Another wonderful photo courtesy of Afghan Lord.
For the “Best Afghan Election Pictures on the Web” you must see Afghan Lord and click on one of his many Flickr Photo links. 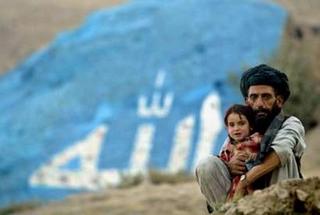 Afghanistan goes to the polls today to elect a lower house of parliament along with councils for each of its 34 provinces. (Reuters)

In what looks to be a knockout punch to the Taliban, Afghanis are lining up at the polls and are determined to vote in today’s historic election.

U.N. and U.S. officials predicted a massive turnout despite a Taliban call for a boycott of the elections.

“It’s the day of self-determination for the Afghan people,” he said. “After 30 years of wars, interventions, occupations and misery, today Afghanistan is moving forward, making an economy, making political institutions.”

Some 12.4 million Afghans were registered to vote at more than 6,000 polling stations, guarded by some 100,000 Afghan police and soldiers and 30,000 foreign troops.

The Taliban said they would not attack civilians heading to the polls but warned them to stay away from areas where the militants might attack security forces.

The Taliban tried to scare people from the polls but it does not look to be succeeding:

Enthusiasm among Afghans to vote in their first free legislative elections in more than 30 years has been high and the commander of US forces in the country predicted a record turnout of the 12.5 million registered to vote.

Lieutenant-General Karl Eikenberry said Taliban insurgents would not hesitate to attack election workers or voters to try to disrupt the ballot, but they would not succeed.

On Saturday, the evil of the Taliban was made clear and apparent. Security forces saved thousands by spoiling a planned dam explosion:

Security forces arrested 20 militants as they were laying explosives to blow up a massive dam in southern Afghanistan on Saturday, the government said.

Thousands of people live near the dam.

And, I woke up to this good news this morning…

Afghan Polls Close Without Much Violence

Publius Pundit is “blogging up a storm” on the election, in the words of Glenn Reynolds.
Norm Geras at NormBlog has more on Sabrina Saqueb. the 25 year old star pictured above.
Afghan Lord is brilliant.
California Yankee has more on the election.
Instapundit is reporting.