“I was very moved when I received an email with the funeral pictures. I too… attended a funeral procession for Cpl. Sean P. Kelly, in the small town of Pitman NJ.

I have never seen anything like the pride and honor shown by the people of our small town. Elementary school children left their classrooms to line the procession route. Residents of a group home in their wheel chairs lined the street holding flags. Fireman, policemen, and other military officers dressed in their formals stood at attention.

These heroes deserve this and more. Thank you for sharing your home town story… it is very sad to realize that this is happening in many communities across the country.” 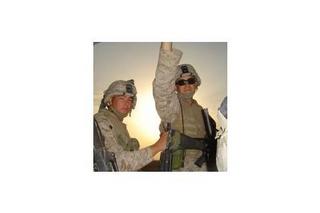 Cpl. Kelly was one of 31 military personnel who were killed when their helicopter crashed in a sandstorm outside of Baghdad. There were no survivors among the 30 Marines and one Navy corpsman in the CH-53 Sea Stallion helicopter that crashed near Ar Rutbah, about 220 miles west of Baghdad.

Cpl. Sean P. Kelly, age 23 was killed in a helicopter crash in Iraq on January 26, 2005. Sean grew up in Pitman and was a graduate of Pitman High School Class of 2000. He entered the U.S. Marine Corps in December 2001. Sean was an avid sports fan and loved life.

We not only had issues trying to do our job in a hostile environment where rocket fire and stray RPGs were the norm, we also had to provide support to the Jordanian Army that has different procedures and standards. It took a lot of patience and hard work from both sides to understand each other and live together. Working with an army within the coalition for Operation Enduring Freedom can be very challenging, but very rewarding. It provides a firsthand look at how different coalition forces operate, interact, live and overcome cultural differences. It also provides an insight on how different countries view their roles in the global war on terrorism.

Jim Hoft
Jim Hoft is the founder and editor of The Gateway Pundit, one of the top conservative news outlets in America. Jim was awarded the Reed Irvine Accuracy in Media Award in 2013 and is the proud recipient of the Breitbart Award for Excellence in Online Journalism from the Americans for Prosperity Foundation in May 2016.
FBI Arrests CDC Critic Dr. Simone Gold on Monday After She Was Filmed in the US Capitol Walking Around with a Bullhorn -- FBI Singled Her Out
John Brennan Gives the Plan Away: Biden Officials Moving in "Laser Light Fashion" to Identify and "Root Out" Political Opposition from Population (VIDEO)
Remember When They Said the Betsy Ross Flag was Racist? - Well, Now It's Not Racist cuz Joe Biden Used It
Soviets Used "Operation Trust" to Identify, Arrest and Persecute Anti-Communists - Is That What the Deep State Has Planned for Q-Anon?
Racist Joe Biden's First Move as President Includes Firing the Black Guy in a Power Position
See more...