The 70 year old was convicted on all 5 charges. 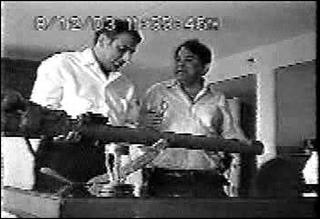 In this image released from the US New Jersey Attorney’s office showing British Businessman Hemant Lakhani, right, allegedly attempting to sell a sample shoulder-fire missile to an unidentified FBI informant in a New Jersey hotel in August 2003. (AP)

A 70 year old British businessman, Hemant Lakhani, was sentenced on Monday for trying to smuggle shoulder-launched missiles into the U.S. to aid terrorists.

Hemant Lakhani, 70, was convicted in April of attempting to sell the missiles to a group he thought would use them to shoot down commercial airliners.

During his trial, and again Monday, his lawyers said Lakhani was the victim of government entrapment because the supposed missile seller and buyer were actually government agents.

Lakhani was convicted on all five charges he faced: attempting to provide material support to terrorists, unlawful brokering of foreign defense articles and attempting to import merchandise into the U.S. by means of false statements, plus two counts of money laundering.

Federal prosecutors were seeking the maximum on each count, for a total of 67 years, with Assistant U.S. Attorney Stuart Rabner recounting evidence in which Lakhani volunteered praise for Osama bin Laden.

“We may see a man who looks like us and dresses like us, but is so morally bankrupt that he plots the death of thousands of people,” Rabner said.

U.S. District Judge Katharine Hayden rejected pleas for leniency from Lakhani and his wife, referring to what she called “overwhelming” evidence of his “reprehensible conduct.”