Iraqi Authorities say they have taped confessions by Saddam. 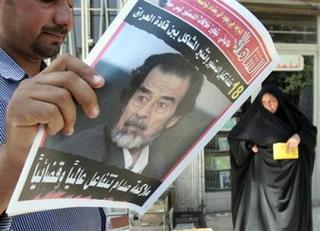 Iraqi President Jalal Talabani said Tuesday that Saddam Hussein should be hanged “20 times a day because he tried to assassinate me 20 times.” Saddam Hussein’s trial will begin on October 19th.

Iraqi Authorities say that they have taped, signed confessions by Saddam Hussein:

Saddam Hussein has confessed that he gave orders to execute thousands of Kurds in the late 1980s, according to Iraqi President Jalal Talabani.

In an interview with Iraq’s state-funded broadcaster al-Iraqiya, Talabani said he had spoken to one of the Iraqi Special Tribunal judges involved in the investigation who said that “he was able to take important confessions from Saddam Hussein and he has signed these confessions and there is video and audio for these confessions.”

Talabani said the judge told him that Saddam confessed that he gave orders for the executions and military operations directed against Kurds in what came to be called the Anfal campaign.

Saddam was able to meet with his new lawyer for the first time since the trial date was announced:

Saddam met with his lawyer for the first time since the trial date was announced, said Abdel Haq Alani, a legal consultant to Saddam’s eldest daughter, Raghad, who lives in Jordan.

“The meeting took place on Monday, but I’m not at liberty to disclose the contents of the talks,” Alani said earlier in the day, before Talabani’s statements.

Alani, an Iraqi lawyer who practices in Britain, reiterated in a telephone interview that neither Saddam nor Dulaimi has been officially informed of the trial date.

Saddam’s original “Dream Team” of lawyers was sacked in August after months of confusion and infighting.

Previous posts on the The Butcher of Baghdad’s Trial:
Saddam Preparing for Trial
Saddam’s Top Lawyer Quits
“Team Saddam” Back in Court
“Saddam the Victim”… Are you buying it?
Saddam’s Family Fires Foreign Defense Team