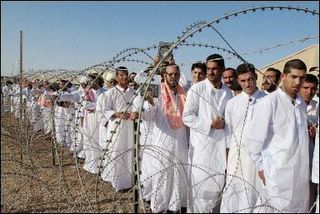 Prisoners at Abu Ghraib line up to be released today.

The US and Iraqi authorities are releasing 1,000 prisoners from Abu Ghraib prison this week:

“These detainees were selected for release following a careful and thorough review of their files by a special Iraqi-led review board which determined they had not committed serious crimes,” the military said.

Ramadan, a month of fasting that is the pinnacle of the Muslim religious calendar, starts around October 4 this year.

U.S. forces are holding about 11,800 prisoners at several detention centers in Iraq, with the largest number, 6,300, held at Camp Bucca in the south.

About 4,200 are currently held at Abu Ghraib,

500 of the detainees were released today:

After a brief ceremony outside the prison on the outskirts of Baghdad, the 500 freed detainees left the area on public buses. They were the first of 1,000 to be freed before Ramadan begins next week, the U.S. military said.

Arab governments often pardon nonviolent offenders during Ramadan. But the move this week also appeared to be part of a government effort to persuade citizens to vote in the Oct. 15 national referendum on Iraq’s draft constitution, particularly the Sunni minority.

Approval of the constitution would be an important step in the country’s democratic transformation. But many Sunni leaders and insurgents are calling for a boycott or a “no” vote in the referendum. They say the document would leave minority Sunnis with far less power than the country’s Kurds and majority Shiites.

If two-thirds of voters in any three of Iraq’s 18 provinces reject the charter, a new government must be formed and the process of writing a constitution starts over.