US Envoy Tony Hall was barred from seeing Zimbabwean demolition victims last week on his visit to deliver food aid to Zimbabwe.

FOOTAGE OF “DRIVE OUT THE TRASH” CAMPAIGN FROM LAST MONTH,
VIDEO HERE

This next round of “cleanup” will focus on street children and beggars! 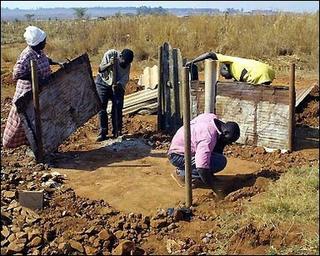 Residents of the Hartclif extension, a shantytown of some 20,000 people in northwest Harare, building a makeshift house, August 8, 2005. (AFP)

Zimbabwe is planning to resume the “Cleanup” of illegal vendors weeks after it stopped the controversial practice:

Zimbabwe last month declared an end to its controversial demolitions of shantytowns, dubbed “Operation Restore Order,” after a critical U.N. report said the operation had destroyed the homes or jobs of at least 700,000 people.

Harare City Council spokesman Lesley Gwindi told Reuters on Monday that municipal authorities were worried that street children and illegal traders had returned to the capital and were once again operating from unapproved sites.

“We are going to remove them, we will push them out,” Gwindi said. “The question was always whether we will be able to sustain the order and cleanness that was brought about by the clean-up exercise and this is what we are doing,” he said.

After destroying thousands of the homes and leaving over 700,000 homeless, the Zimbawean Government is just now asking the UN for help in building homes for those who are homeless!

UN-HABITAT director Anna Tibaijuka, sent by U.N. Secretary General Kofi Annan to assess the initial crackdown, said in a report made public last month the campaign had destroyed the homes or jobs of at least 700,000 people and affected the lives of another 2.4 million.

The government has asked for help from the international community including the United Nations to build new housing for thousands of homeless residents. 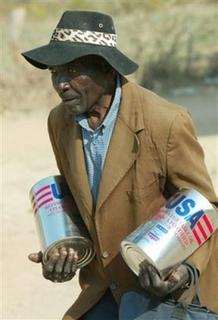 An elderly man carries two cans of vegetable oil at a food distribution centre in Mutare where Tony Hall, United States Ambassador to the United Nations Relief Agencies in Rome was witnessing distribution of food. (AP)

The US will not cut off food aid to Zimbabwe despite criticising President Robert Mugabe’s government for human rights abuses.

The government is going to focus on street children in the next round of cleanup:

“We are now finding a way of taking away the street kids and the beggars, but by planning where we will take them to,” Makwavarara told AFP.

She said that the 10-week previous operation “wasn’t thought out exactly and that is why you see us now trying to put the right things in place”.

“If they are coming back, I can say we are not planning well,” said Makwavarara, who has been appointed by the government to run the city following the suspension of an opposition mayor in 2003.

Hundreds of beggars and children rounded up during the urban clean-up campaign that ended in late July have returned to the streets of the city where they can often be seen at intersections and in downtown malls.

The Mugabe Government has refused help rom the African Union in mediation efforts between the government and the Zimbabwe Movement for Democratic Change (MDC) Opposition. The MDC has welcomed the mediation efforts.

Also, three major newspapers have been accused of recieving funding from the government. Director Andrew Moyse of the Media Monitoring Project, which observes and analyzes Zimbabwean media, said the three publications have in the past three years published reports largely favorable to the ruling ZANU-PF party.

Sokwanele has more on Operation Murambatsvina – the aftermath.