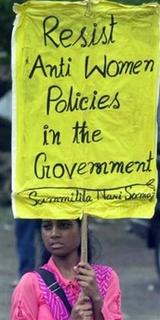 In his first trip to Asia since taking over as head of the World Band, Paul Wolfowitz stressed women’s rights and rural development:

Paul Wolfowitz, making his first trip to Asia as president of the World Bank, this week emphasised the bank’s role in supporting projects designed to improve the lives of women, and in funding infrastructure projects.

Speaking in India as part of a week-long tour during which he has already visited Pakistan and will travel to Bangladesh on Sunday, Mr Wolfowitz made equal rights for women and rural development key themes, along with trying to ensure that the benefits of growth are widely shared and supporting efforts to promote good governance.

Wolfowitz is also promoting good governance and reform with his host nations this week:

Wolfowitz will make equal rights for women and rural development key themes, along with trying to ensure that the benefits of growth are widely shared and supporting efforts to promote good governance.

“Paul Wolfowitz was scheduled to visit Pakistan and India, but we requested him to make a trip to Bangladesh and he accepted our request,” Saifur said.

“He will discuss about the WB financed projects and reform initiatives with us. We will tell him about WB’s unwanted conditions in releasing loan installments and will want assistance in a predictable way,” Saifur told reporters at his office yesterday.

“What will you say if the WB president raises the issue of political stability and Wednesday’s bomb attacks?” reporters asked Saifur and he replied, “we will cite various achievements of the country to prove that the economy is “on the right track.”