** The US says it will restore full diplomatic relations with Libya and is pushing Tripoli to address concerns over democracy and human rights. **

* 131 Political Prisoners were released over the weekend
* Sen. Richard Lugar (R-IN) visited Libya this weekend in the highest US profile trip to Libya since ties improved last year
* The US suggests it may open an embassy in Libya soon
* Even President Bush has been invited to Tripoli!

The countries have been rebuilding ties since Libya gave up the pursuit of weapons of mass destruction in 2003.

Diplomatic relations were formally resumed in June 2004, when the US opened a liaison office – a lower-level diplomatic post – in Tripoli.

A two-day visit to Tripoli at the weekend by a senior US senator has been seen as the next step in improving the relationship, following decades of hostility.

Senator Richard Lugar (coming from a successful trip to Morocco where he helped free POW’s from years of incarceration) confirmed the US was discussing Libya’s removal from a US list of alleged state sponsors of terrorism and the opening of an embassy.

Libya expects to be taken off the list of state sponsors of terrorism this year by the United States: 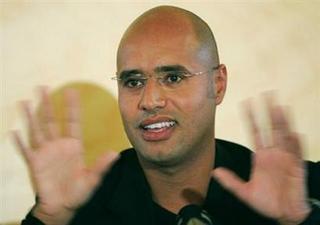 Saif al-Islam Gaddafi, the son of Liban Leader Moamer Gaddafi, has high expectations for his country as he spoke with reporters earlier today. (Reuters)

“Lifting Libya from this list will take place at the end of this year after a series of steps from both sides,” Saif al-Islam Gaddafi told reporters late on Monday.

He did not elaborate on what steps would be taken but said the two countries would exchange ambassadors for the first time in more than three decades, likely in the next few days.

A State Department spokesman said on Monday Libya still had work to do before resuming full diplomatic ties with Washington and being removed from the terrorism list, and declined to say whether there were plans to open a U.S embassy in Tripoli soon.

Aljazeera reported that Libya released 131 political prisoners over the weekend!

In an attempt to show that Libya is improving its human rights record, Seif al-Islam, son of Libyan leader Muammar Gaddafi, said that Tripoli will release 131 political prisoners over the next few days.

He also said that he expected the opening of the two countries’ embassies “in the next few days”.

A two-day visit to Tripoli at the weekend by a top U.S. senator also showed the U.S.’s willingness to normalize relations with Libya.

Lugar’s trip was the highest profile U.S. visit to Libya since ties began to improve between the two countries.

Update: The highly regarded Tigerhawk sends more data on Libya’s positive moves. This link’s about possible talks with Israel. Listen to Tigerhawk. He is a smart man… Hawkeye fan that he is!