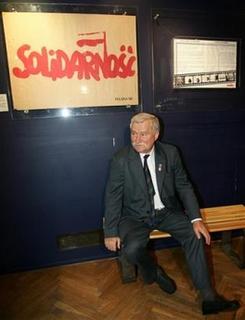 Solidarity founder and Nobel peace prize winner Lech Walesa sits below an original banner for Solidarity at the exhibition center at the shipyards in Gdansk on Thursday Aug. 4 , 2005 , where he led strikes 25 years ago this month. (AP)

Former Polish President Lech Walesa spoke out against the current regime in Belarus:

Lech Walesa who won a Nobel Peace Prize and went on to become Poland’s president, was speaking on the 25th anniversary of the union’s founding.

In an interview for the BBC’s World This Weekend programme, he said Belarus should expect no support from the West.

He said the European Union should be ready to support a reformed Belarus.

Even 25 years after the founding of Solidarity, the trade union movement which eventually toppled Communist rule in Poland, he is regarded still as an iconic figure by many in central and eastern Europe.

Now he is turning his attention to Poland’s neighbour, Belarus, considered to be the most repressive state in Europe.

Mr Walesa says he would support a revolution there, similar to those which have taken place in Ukraine and Georgia.

Last week Belarussian authorities arrested the Leader of the ethnic Polish minority for his second sentence in the last month:

A leader of Belarus’ ethnic Polish minority has been given a second 15-day prison term, in an apparent escalation of tension with the authorities.
Tadeusz Gawin, the former head of the Union of Poles, was accused of beating his cell mate – a claim he denies.

Publius Pundit has much more information on the progressions in Belarus.

Poland is also asking Russia to crack down on those responsible for attacking Polish diplomats in Russia. The tension between Belarus and Poland has lately spread into Russia.