In many areas women voter turnout was highter than that of men. However, there will be a revote in several western districts where women were still not allowed to vote. Even in Pakistan considered more stable than Iraq, there were 19 people killed today at the local polling stations. 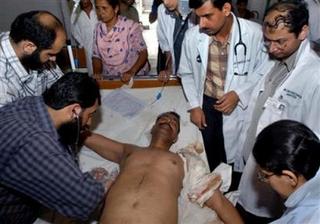 Pakistani doctor and para-medics provide medical help to voter, Mohammad Afzal, who was injured in a shooting during the municipal elections in Lahore, Pakistan on Thursday, Aug. 25, 2005. [AP]

19 pakistanis died today during the second round of municipal elections:

Clashes between supporters of rival candidates left at least 19 people dead and 100 injured as voters went to polls Thursday in the second phase of municipal elections, officials said.

The violence erupted despite the deployment of thousands of soldiers, paramilitary troops and a large number of police at polling stations. In the first phase of the elections on Aug. 18, 22 people were killed and more than 200 injured.

Five deaths were reported in southern Sindh province, one in northwestern Pakistan, and one in the southwest, said an interior ministry official who spoke on condition of anonymity in accordance with official policy.

Elections to choose councilors and mayors are held every four years in the predominantly Islamic nation, where municipal officials look after the welfare of communities, including supervision of schools, clinics and roads. 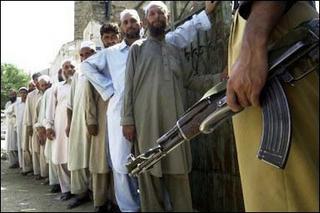 Clashes between rival political gangs in Pakistan left 19 people dead and dozens more injured as voters cast their ballots in the second round of key local elections. (AFP)

However, there was some good news to come out of these elections as many see them as a positive step towards democracy.

218,000 budding Pakistani politicians are running in nationwide elections for the coveted new post of nazim, the rough equivalent of a mayor in the United States.

Four years ago, the offices did not exist. Today, they are a bright spot in an otherwise failed Western effort to turn Pakistan into a stable and vibrant democracy.

“It’s close to democracy, if not true democracy,” said Abdul Rashid, a 51-year-old businessman who praised the performance of Khan and other new nazims. “Our problems are being solved.”

Under a system created in 2001, Khan and each of the country’s 79,612 nazims, or supervisors, receive several thousand dollars in government development funds for their tiny districts, which range from a few thousand to about 30,000 people.

Then they face a choice. They can try to win re-election by using the money for the payoffs and patronage that have dominated Pakistani politics for decades. Or they can try to win by improving the government services that their constituents rely on: roads, electrical systems, schools and health clinics.

This seems to be working. Many of the nazims are not just making promises, but choosing to put money into their communities.