About 300 Iranian Islamist students hurl rocks and tomatoes at the British Embassy in Iran today in a protest against the US and Europe. 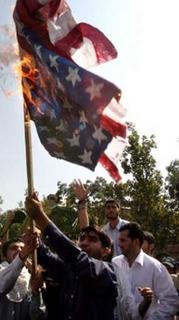 Iranian students burn the American flag in front of the British Embassy in Tehran on Sunday. (Reuters)

The student protesters threatened to occupy the British Embassy today:

“We must occupy the embassy and get rid of the English spies,” chanted the crowd of demonstrators.

“Death to England, death to Germany, death to France, death to the United States, death to Israel,” the members of the Islamic militia of universities in Tehran and the provinces sang.

They called for Iran to withdraw from the Non-Proliferation Treaty (NPT) and to continue the nuclear activities it resumed in the past week. 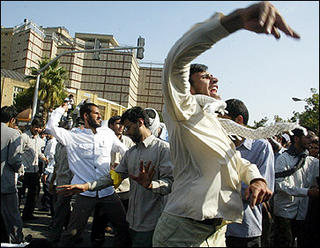 Iranian Islamist students bombard the British embassy with stones and tomatos during a demonstration in protest at Britain’s role in opposing Iran’s nuclear activities in Tehran. (AFP)

Iran today said that it will never stop converting uranium ore but is willing to pursue talks about its uranium enrichment program. 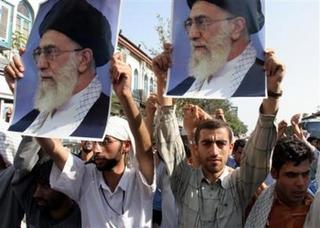 Iranian hardliner students hold pictures of the supreme leader, Ayatollah Ali Khamenei, in front of the British Embassy in Tehran, on Sunday. (AP)

However, German Chancellor Gerhard Schroeder, in similar tone to his 2002 campaign, disagreed with the US on the possibility using the military option for resolving the dispute over Iran’s nuclear programme. He Said that it should be “taken off the table”. 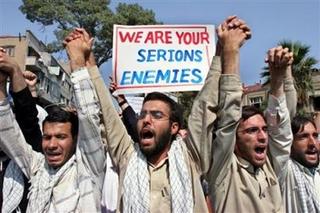 The sign from the demonstration today in Tehran conveys that these Iranians are serious. (AP)

The conservatives in Germany attacked Schroeder on his approach to Iran.

There was a similar protest for nukes in Tehran on Friday after prayers.