Azeri officials arrested Youth Democracy Leader Ruslan Bashirli this week. The youth group said it was a smear campaign by the authorities to discredit the movement. 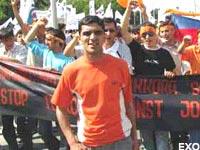 Yeni Fikir leader Ruslan Bashirli has captured the headlines in this oil-rich former Soviet Caucasus state since it was announced by prosecutors on Thursday that he had been arrested and held by the authorities. (Baku)

Ruslin Bahirli was set up by authorities on his trip to Armenia earlier this year:

Bashirli’s group, Yeni Fikir, modeled on movements that helped topple entrenched regimes in Georgia and Ukraine over the last two years, has participated in some of the most visible protests since a ban was lifted on demonstrations this summer.

The video, allegedly shot in the Georgian capital Tbilisi in July, showed Bashirli drinking with the men and discussing the possibility of a velvet revolution in Azerbaijan.

“Those men were agents of (Azerbaijan’s) ministry of national security, he did not know who they were,” Farmazogly said.

Authorities also announced that they were going to clamp down on the opposition ahead of the elections.

* Robert Mayer at Publius Pundit had analysis on this arrest earlier today. *

Armenia officials said that the charges that they may be involved in a plot to overthrow the Azeri government were not based in reality. 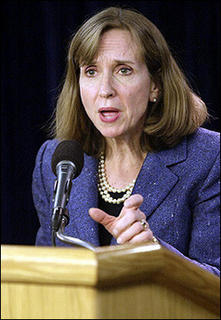 US Undersecretary of State for Global Affairs, Paula Dobriansky, put pressure on Azerbaijan to do more to build trust in the voting process ahead of the November election. (AFP)

Also this week, there were numerous reports of attacks on protesters and arrests in a number of Azeri cities:

On August 1, members of the tripartite opposition Azadlig bloc, including Khalig Bahadir, an Azadlig candidate for parliament, claimed that they were beaten and up to 37 people arrested by police, after activists in the central Azerbaijani town of Sabirabad decided on a different location for a previously authorized demonstration, ANS television reported. Officials have denied the charges.

Hasan Karimov, deputy chair of the Popular Front Party, a member of the Azadlig bloc, told reporters that a similar clash in the western district of Tovuz had resulted in the arrest of 19 opposition activists, the news agency Assa Irada reported.

A protest in the southern district of Lankaran was stopped when police suggested participants move the event seven kilometers away from the district center, Karimov said.

Opposition members in Ganja, Azerbaijan’s second largest city, also report similar pressure being brought to bear. After a July 1 meeting with US Ambassador Reno Harnish, Jahangir Amirkhanly, director of the opposition Musvat Party’s Ganja branch, claims that he was taken to the police station and threatened by the chief of police. “He warned me not to complain [about the city’s problems] when Andreas Gross and Andreas Herkel, co-rapporteurs of the PACE [Parliamentary Assembly of the Council of Europe] Monitoring Committee, will visit the city [on July 8],” Amirkhanly told EurasiaNet. 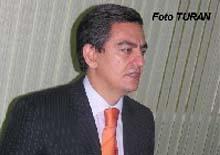 Ali Kerimli, the leader of the Popular Front Party of Azerbaijan (AXCP) today described the arrest of youth leader Ruslan Basirli as part of a government plan to intimidate the opposition, but vowed to continue campaigning for free and fair parliamentary elections in November.

And, it is still not clear if the Uzbekistan military base will be transferred to Azerbaijan.