** Despite the news headlines, the US secured other options for the military before the Uzbekistan announcemnet last week. **

Lawmakers in Uzbekistan voted last week to oust the US from the Karshi-Khanabad (K-2) airbase in the south of Uzbekistan. And, although this made major international headlines it was not an unexpected event. The government had formally evicted the US already back in July. The vote last week was a mere formality:

The move is widely seen as part of a backlash against Washington’s criticism of the Central Asian nation’s human rights record.

The Senate approval was not unexpected, said Kirill Nourzhanov, a Central Asia specialist at the Australian National University, as the 100-seat upper chamber is overwhelmingly loyal to President Islam Karimov.

“It’s an absolute rubber stamp, even worse than the lower house of parliament,” he said Monday. “It’s a joke.” 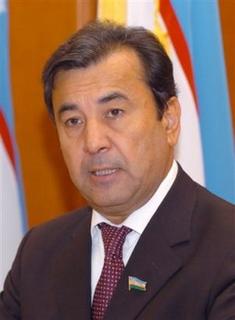 The country’s former foreign minister, Sadyk Safayev speaks to the press in Tashkent, Uzbekistan, Friday, Aug. 26, 2005. Sadyk Safayev, said the withdrawal of U.S. troops was demanded by Kashkadarya’s people because of alleged environmental damage caused by the base’s activity, including increased health problems among people and water and air pollution. The Uzbek upper house of parliament on Friday backed the government’s order that the United States withdraw troops from this Central Asian nation. (AP)

Washington and Tashkent signed an agreement in Oct. 2001, allowing the U.S. to use the Soviet-era Karshi-Khanabad airbase in the south of the country. America at the time was preparing to launch its military campaign against the Taliban militia and al-Qaeda allies in neighboring Afghanistan, following 9/11.

The resolution agreed upon Friday said the Senate saw no reason for retaining the agreement as “the period of war and conduction of large-scale military operations in Afghanistan has generally been concluded.” 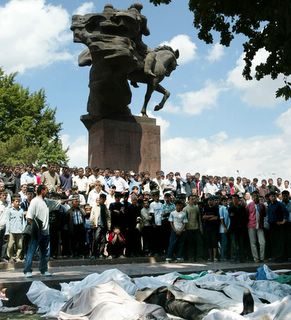 Claiming the dead in Andijan after the bloodbath in May when government soldiers fired on demonstrators at a public rally.

Although, Karimov may feel some breathing room, the Uzbekistan people may be the big losers in this deal:

“Uzbekistan was by far the largest recipient of American aid in the wake of [9/11],” he said, with funding “running into hundreds of millions of dollars.”

“The financial argument is totally spurious — Uzbekistan did not make a financial loss by keeping the American base on its territory.”

As far as the health and environmental problems were concerned, Nourzhanov said, no evidence was presented.

“Medically, has it been established that noise produced by planes or exhaust [fumes] have somehow contributed to these problems? I don’t know. And since when are the Uzbek authorities caring about the well-being of their own population?”

Certainly after the Karimov government just mowed down hundreds of Uzbek demonstrators at a public gathering in May Nourzhanov has a good point. 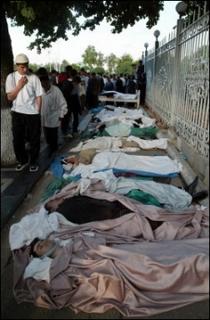 Hundreds were reported dead from the violence in May in Andijan, Eastern Uzbekistan. Many of the bodies, including those of women, were thrown into buses and carried away after the massacre.

Uzbekistan doubts the UN has any real interest in the well being of the Uzbek refugees in Kyrgyzstan.

However, Defense Secretary Donald Rumsfeld did secure other options for the US, including possibilities with Turkmenistan:

Rumsfeld secured approval from Kyrgyzstan to continue using the Manas airbase there, and from Tajikistan to maintain overflight and refueling rights for U.S. aircraft.

No cooperation decisions were announced, but the U.S. Embassy in the capital, Ashgabat, said in a statement Abizaid and President Saparmurat Niyazov “discussed areas of mutual interest, including broad security issues of regional consequence.” 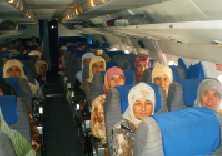 450 refugees who fled to Kyrgyzstan after the May 13th Massacre were flown to Romania for safe haven in a UN sponsored action.

Turkmenistan is strategically located, bordering both Afghanistan and Iran. But its government is also the most authoritarian in Central Asia, with no independent political activity or opposition parties allowed, and press and religious freedom curtailed.

Nourzhanov said despite speculation that the U.S. may be looking for a temporary base there, “I don’t think that’s likely because Turkmenistan is a prime candidate for another ‘colored revolution’ – it’s much more unstable than Uzbekistan.”

He also questioned the continuing importance of a base in Uzbekistan, arguing that the key U.S. bases in Afghanistan itself, Bagram and Shindand, had reportedly been renovated sufficiently to enable aircraft of any type to land there.

Much of this information was taken from Crosswalk.com from an article written by Patrick Goodenough.